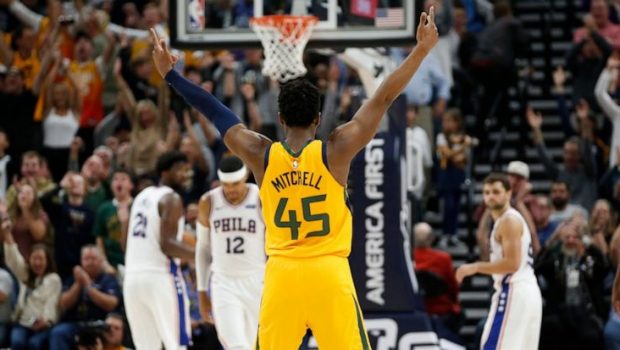 JOJO’S BACK, BENNY’S OUT AND SIXERS ARE DEFENSELESS!

Donovan Mitchell had 24 points and eight assists as the Jazz beat the Sixers 106-104.

Bojan Bogdanovic added 20 points and Rudy Gobert had 14 points, 16 rebounds and three steals. Joe Ingles scored a season-high 16 off the bench for Utah.

Joel Embiid had 27 points and 16 rebounds to lead the Sixers, who have dropped two straight after a 5-0 start that made them the last unbeaten team in the NBA. Josh Richardson added a season-high 24 points and Tobias Harris chipped in with 16.

Ben Simmons did not play in the second half because of right shoulder soreness after bumping into Royce O’Neale’s chest while posting up on a first-quarter play. Simmons finished with two points and two assists in 10 minutes.

Not having their point guard on the floor altered what the Sixers were able to do in terms of containing Utah’s top playmakers.

“Defense is where we felt the pain of not having him the most,” coach Brett Brown said.

The Sixers built a 44-36 early in the second quarter after Embiid scored on three straight possessions, capped by a step-back jumper. Utah chipped away at the deficit behind Bogdanovic, who scored 11 points on 5-of-6 shooting in the period.

The Jazz finally went ahead 55-51 when Bogdanovic knocked down a pair of shots and fed Gobert for an alley-oop dunk over three straight possessions.

Utah took control in the third behind hot shooting from Mitchell. He scored back-to-back baskets to spark a 12-2 run that gave the Jazz a 78-65 lead late in the quarter. Mitchell totaled four field goals and assisted on two others during the period.

Embiid hit four free throws over consecutive possessions to help trim Utah’s lead to 103-101 with 1:51 left. Bogdanovic drained a 3-pointer on the ensuing possession to keep the Sixers from taking the lead. It ended up being the only 3 the Jazz made during the quarter.