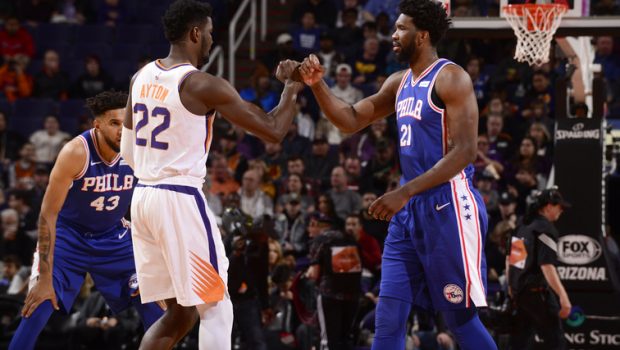 Nothing is sacred, even a 30-point lead!

Joel Embiid matched his season high with 42 points, 30 in the first half, and grabbed 18 rebounds and the visiting Sixers held on to beat the Phoenix Suns 132-127.

Ben Simmons added 29 points and J.J. Redick 27 for the 76ers, They were without Jimmy Butler and Wilson Chandler, both due to an upper respiratory infection.

The Sixers led by 23 at halftime and as many as 30 in the third quarter. The Suns cut it to three points before Redick finally sealed the victory with a pair of free throws with 4.3 seconds to play.

“We love to make the game interesting,” Embiid said. “We’ve done it a lot, but give credit to Phoenix. They hit a lot of 3s in the third quarter and they got back in the game. It was a fun game but we have to make sure next time we need to finish and push the lead even further.”

Embiid scored 10 points as the Sixers opened the second quarter with a 13-2 run to lead 58-36 and the margin barely changed the rest of the one-sided half and the 76ers led 72-49 at the break.

Phoenix finished the third quarter on a 13-2 run. Troy Daniels sank a pair of 3s and Ellie Okobo added another after a Philadelphia turnover cut the lead to 104-87 after three.

Slow starts have been a problem for the Suns twice on their current home stand and often during the season.

“As a team, we all just have to come out strong, just come out aggressive throwing the first punch,” Ayton said. “There’s a really small margin of error to play against great teams like this so it’s pretty hard to mess up and have silly mistakes against teams, and they’ll make you pay.”