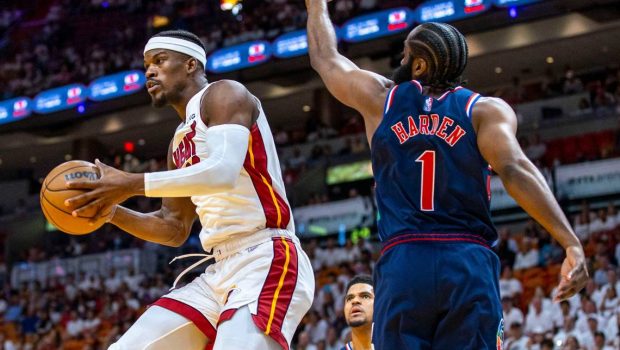 JOJO-LESS SIXERS TKO’D IN GAME 1 — ‘IT’S NOT TOTALLY OUT OF REACH’!

If last night’s game 1 in the Sixers-Heat Eastern conference seni series had been a boxing match, it would have been stopped in the third quarter.

Miami wins on a technical knockout.

But it was an NBA playoff game, and it continued until the Heat won 106-92.

Game 2 is Wednesday night in Miami, and the Sixers won’t have NBA MVP Joel Embiid then either, as he waits to be cleared of the concussion he suffered last week when he was cheap-shotted by the Raps Pascal Siakam.

Embiid wasn’t even in Miami while recovering from an orbital fracture and concussion.

Jimmy Butler added 15 points for the top-seeded Heat, who got 10 from Gabe Vincent and P.J. Tucker.

Tobias Harris scored 27 points for Philly, which got 19 from Tyrese Maxey and 16 points, nine rebounds and five assists from James Harden.

“I didn’t like how we moved the ball,” 76ers coach Doc Rivers said. “I thought we passed late tonight. I thought the physicality affected us tonight and that had an impact. There were too many times, we’d take the extra dribble and by the time we passed it they got there.”

Miami came out as aggressive as could be, putting Tucker on Harden and having him guard him the entire 94 feet of the floor in a similar approach to what the Heat utilized against Atlanta’s Trae Young in the first round series.

It worked — for a while. Miami led by as many as 12 in the opening quarter, then a 10-2 run fueled by eight points from Herro gave the Heat a 13-point edge at 37-24 to mark their biggest of the half. The margin was still 46-36 midway through the second after another Herro basket.

The rest of the half was all Philly and Sixers led 51-10 at the break.

And that was the 76ers’ takeaway from the night.

“It’s doable. It is doable,” Sixers guard Tyrese Maxey said. “It’s not totally out of reach.”