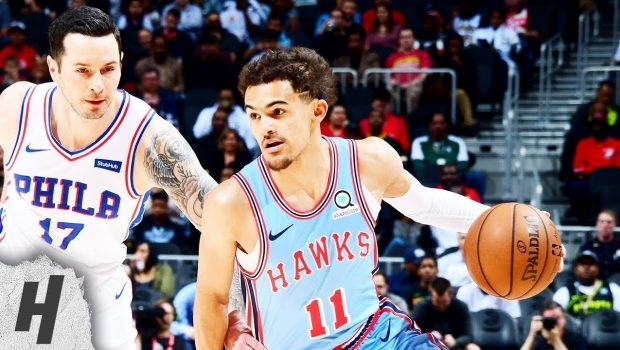 ”They have a great offense, there’s a lot of movement, they space the floor well,” JJ Redick said. ”Trae Young and John Collins- their two-man action presents a lot of problems – and Trae’s just playing at another level in terms of making reads right now.”

J.J. Redick wants no more of playing the Atlanta Hawks.

With four games left in the regular season, the Sixers still need one victory and a loss by Boston to secure the No. 3 seed in the Eastern Conference. They have dropped four of six, a stretch that began with a last-second setback at Atlanta 10 days ago.

Coming off a lackluster loss at Dallas two nights ago, the Sixers were without star center Joel Embiid for the third straight game. Forward Jimmy Butler returned from a one-game absence with back tightness and finished with 16 points.

Philly, which missed 16 of 38 free throws, got 30 points from J.J. Redick and 21 from Tobias Harris. After 27 lead changes and 13 ties in the first three quarters, the Sixers never led in the fourth.

”It says how much we miss Joel,” Butler said. ”He’s a big part in what we do. When you’re missing a guy like that on both ends of the floor, it’s tough. I don’t think we handled it well. There’s always going to be some adversity, certainly when he’s not there, but I feel like we’ve just got to do better as a whole.”

Young, who scored 32 points and hit the game-winning shot on Butler 10 days ago, was at it again, his 10th assist coming on Collins’ reverse dunk that put the Hawks up 85-84. Young missed a long 3 but grabbed his own rebound and dribbled quickly for a left-handed layup that made it 119-106 with 5:35 remaining.

Collins blocked Tobias Harris’ dunk attempt a few seconds later and followed a few possessions later with a dunk that made it 121-111.

”For some reason, we play well against playoff teams,” Collins said. ”We get up to play.”