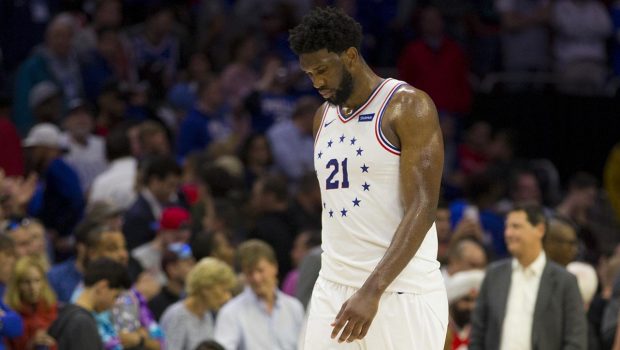 Soon after Joel Embiid delivered a haymaker in game 3 against the Toronto Raptors a week ago tonight with 33 points and 10 rebounds, giving them a 2-1 lead in the East semis, the Sixers looked like the real deal, capable of winning the conference, getting to the NBA Finals and winning it!

What happened between that Thursday and Saturday? We’ll probably never know, but we do know Embiid didn’t sit home resting, taking care of himself to be in tip top shape for game 4, and that’s the problem!

76ers fans are fed up with “under the weather”, “upper respiratory” associated with their superstar center, but there it is!

In a six-day span the Sixers went from looking unbeatable to “probable” “questionable” faster than you can say “gone fishing”!

No one wants to hear any more lame excuses for Embiid not obligating his hefty $29.5M contract, worse yet as analyst Charles Barkley pointed out, “He’s sucking all the life out with his pissy attitude”

After two horseshit performances that leave the Sixers down 3-2 facing elimination in game 6 tonight, Sixers coach Brett Brown tried to shield Embiid from the backlash he deserves, Sixers analyst Mark Jackson took umbrage at Browns words. He rightly stated that Embiid has been not ready to play in all but one game in this crucial series and deserves the sharp criticism for not being more professional!

Only one way Embiid can weather this giant storm, help the 76ers win games 6 and 7, move on to the Eastern Conference Finals, and never leave this franchise, who has treated you like a king, in the lurch ever again.