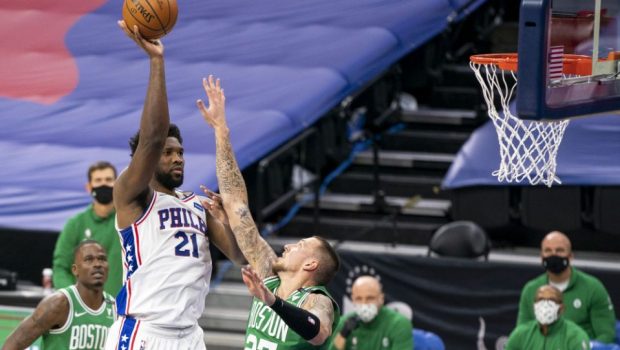 Joel Embiid had 42 points and 10 rebounds, and Tobias Harris scored 22 points in the Sixers’ 117-109 win over the Boston Celtics,

“It’s not sort of, it’s ‘for sure’ MVP-caliber,” Harris said of Embiid.

Embiid is off to the best start of his career and topped 40 points for the second time in three games. He shot 12 of 19 from the floor (one 3-pointer) and was 17 of 21 from the free-throw line. He did it in 34 minutes and scored 20 points in a half (22 in the first) for the fifth time this season.

“If they double, we’ve got way too many shooters for me to be able to kick it out,” Embiid said. “I can attack in a different style. It’s been working well.”

Ben Simmons had 11 points, eight rebounds and eight assists for the Sixers.

Jaylen Brown led the Celtics with 26 points and Marcus Smart had 25. Kemba Walker scored 19 points in his second game of the season after he missed the first 11 with a left knee injury.

“I’m not surprised at the level,” coach Doc Rivers said. “He’s just more talented than even I knew. I knew he was extremely talented, but he has so many more gifts.”

The Sixers need more than what he’s giving them. Simmons was whistled for two offensive fouls within 30 seconds late in the third and the Celtics ended the quarter with a 92-86 lead.

Walker returned in the fourth — he played only 90 seconds in the third on a minutes restriction — and the Sixers had to run out a lineup without Embiid or Simmons early in the quarter. Shake Milton, making a case for top NBA sixth man, and Harris, whose three-point play gave the Sixers a 100-99 lead, kept it a game until Embiid and Simmons returned.

Embiid checked in with 7:44 left and the Sixers holding that one-point lead. Down three, Embiid sank a fadeway to hit 38 points to pull the Sixers within one, grabbed a defensive board, drove to the hoop and was fouled. He sank both again in the clutch.

“He’s going to score some, but 42 is too much,” Celtics coach Brad Stevens said. “I thought not only did he score those points, he also handed the double (team) pretty well and on a couple of occasions, it led to 3-pointers.”

Danny Green’s fourth 3-pointer of the game put the Sixers up 108-105 and they put away a Celtics team that swept them in the first-round of the playoffs last season.