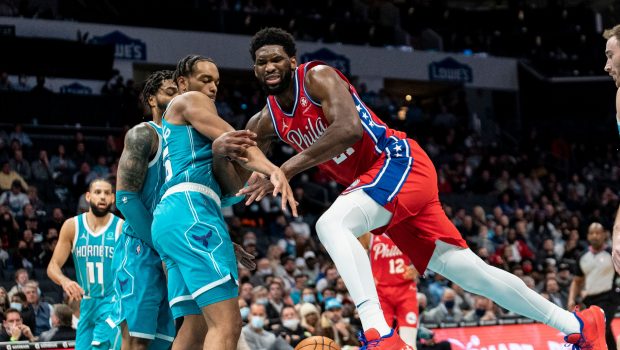 JOJO AND SIXERS TO HORNETS: GET OUT OF OUR WAY!

Joel Embiid drained 32 points and Seth Curry 23 as the visiting Sixers beat the Charlotte Hornets for the second time in three nights and 16th straight game, 110-106.

“It’s tough to beat the same team twice no matter what the situation is,” 76ers coach Doc Rivers said. “We did that. I thought we just hung in there. I thought there were times where we could’ve pulled away and there was a turnover or a missed defensive assignment here or there. But I will take the win.”

Gordon Hayward had a season-high 31 points and seven assists for the Hornets, who played without five rotational players, including last year’s NBA Rookie of the Year LaMelo Ball due to NBA health and safety protocols.

The Sixers finished a four-game road trip with a 3-1 record after starting out with a one-point loss at Boston.

“Anytime we can go on the road and get wins, those are always important,” Harris said. “We did a good job in the fourth quarter executing and getting the shots we wanted and making those looks.”

Embiid, who had 43 points and 15 rebounds in the previous matchup, wasn’t as dominant with his fadeaway jumper but made 15 of 19 foul shots, which left Hornets coach James Borrego a little perplexed.

“I don’t have an answer for that,” Borrego said. “I’ll go back and watch them, but if he is going to shoot 19 free throws a night, it’s going to be tough.”

For the second time in three nights, the short-handed Hornets played the 76ers tight in a game that featured 16 lead changes and 12 ties.

P.J. Washington banked home a 3-pointer from the top of the key with 3:25 left to give the Hornets a 98-97 lead, igniting the crowd.

Danny Green and Embiid answered with 3s to swing the momentum back to Philadelphia. Embiid then added a dunk on a drive down the middle of the lane to extend the lead to seven with 1:53 remaining. The Hornets clawed back to get it to 3m but Harris made two free throws to push the lead to five. The Hornets never got within three again.

For the second straight game, Borrego only played eight guys while working with a limited bench due to protocols.

“I probably played them too many minutes,” Borrego said. “I have to watch that and make sure I don’t overrun them.”