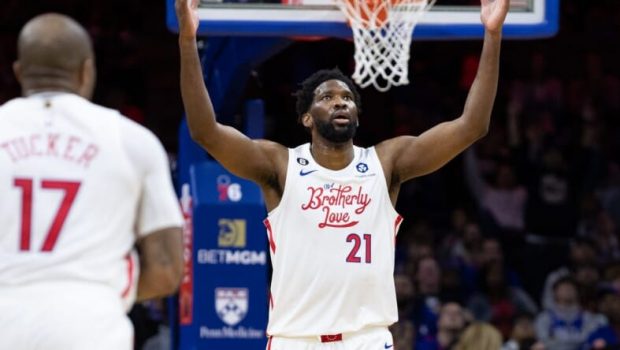 JOJO AND SIXERS PUNCH OUT THE KNICKS FOR 8TH IN A ROW!

Joel Embiid scored 35 points, James Harden had 29 points and 13 assists and the Sixers blew by the New York Knicks, extending their winning streak to eight games with a 119-112 victory.

Georges Niang hit four 3-pointers in Philly’s fourth-quarter surge and finished with 16 points, while De’Anthony Melton added 15 as the 76ers got off to a good start on a four-game road trip after sweeping a seven-game homestand.

The Sixers never led through three quarters, then outscored the Knicks 24-9 to open the fourth, turning a one-point deficit into a 116-102 lead.

Julius Randle scored 35 points and Jalen Brunson had 23 points and 11 assists for the Knicks, who have lost three straight following an eight-game winning streak.

Embiid scored 15 points in the third quarter and Harden took over the game when Embiid went to the bench, with a four-point play and another 3-pointer that trimmed it to 96-95. He made another 3 in the opening minute of the fourth to tie it at 98, then found Niang for a 3 that gave the 76ers their first lead with 10:37 to play.

Niang hit consecutive 3s midway through the period before Embiid had two baskets and Harden made one and set up the other in a 8-0 flurry that put it away at 116-102.

Embiid, the NBA’s scoring leader, started slowly and the Knicks led 37-25 after one. They were still up eight when Embiid scored with 6.2 seconds remaining, and when Brunson lost the ball as New York tried to get a final shot, Shake Milton scooped it up and banked in a 50-footer at the buzzer that made it 63-60.