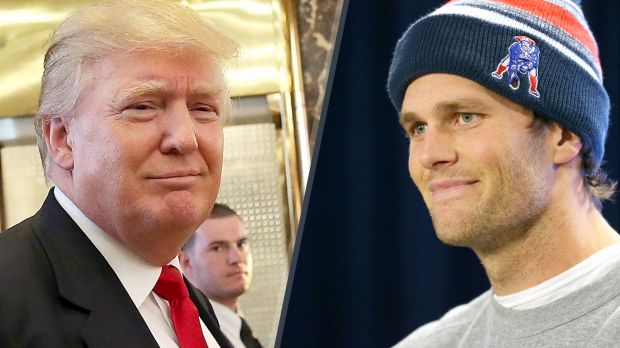 JOCK-IN-CHIEF! HOW PRESIDENT TRUMP MAY HAVE RIPPLE EFFECT ON SPORTS

It may not be a front-burner question for a lot of Americans, but us sports junkies want to know:

How will the election of Donald Trump as president affect or passion for the games?

He will arrive in office next January with more experience in the business of sports than any of his predecessors, could exercise his power to shape the future of American athletics.

A three-sport high school star who in the 1960s drew interest from the Red Sox, Trump will take to Washington an insider’s knowledge of operating sports teams and events — wisdom he could tap to address some of the thorniest issues facing professional and amateur athletics.

The embattled fantasy sports industry? Worth saving, he indicated on the stump.

The multibillion-dollar question of how the government regulates telecommunications in sports? Trump could make a difference.

He has friends in high places in sports, some of whom supported his campaign with cash — a combined $400,000 from NFL owners Bob McNair, Woody Johnson, and Edward Glazer — while others such as Robert Kraft, Bill Belichick, and Tom Brady (above) gave him informal endorsements.

“He is obviously a big sports fan and is close to a lot of owners,’’ Smith College sports economist Andrew Zimbalist said. “I suspect he will be keeping an eye out on how they are doing and will give them an ear on issues they want to talk about. In that regard, I think there will be some positive reinforcement for the sports industry.’’

Trump could appease some of his NFL friends by softening his campaign rhetoric, as many candidates have done after winning the presidency. Or he could continue hammering the NFL over the quality of its competition and belittle the league for its efforts to reduce brain injuries.

Amid flagging NFL television ratings, Trump thundered on the campaign trail, “Who the hell wants to watch these crummy games?’’

He bemoaned the league’s recent protocols aimed at reducing violence.

When a woman was revived after fainting at a campaign event, Trump praised her as being tougher than NFL players with head injuries.

“Concussion, uh-oh! You got a little ding on the head. No, no, you can’t play for the rest of the season,’’ Trump told his audience, referring to NFL players.

When the PGA Tour announced last summer that it was ending its long affiliation with the Trump-owned Doral Country Club in Florida and moving its annual World Golf Championship to Mexico City in 2017, tour officials said the move was based solely on sponsorship issues and not related to Trump advocating strict immigration limits on Mexicans and Muslims.

But Trump was not pleased. He said of the move to Mexico City, “I hope they have kidnapping insurance.’’

Trump could be the first commander in chief to own golf clubs around the world and hold a contentious view of the world’s most prestigious golf tour. A tour spokesman declined further comment.

The PGA’s move comes as the NFL and NBA eye the Chinese market and Major League Baseball yearns to increase its presence in Cuba. With Trump having taken his golf business international — he owns courses from Ireland and Scotland to Dubai — he is not expected to interfere with such global ambitions, despite his hard-line on trading with foreign countries.

Baseball commissioner Rob Manfred told reporters in Arizona that he senses no resistance to the league’s aspirations for Cuba.

In general, Manfred said of Trump’s possible impact on the sport, “We’re not concerned.’’

MLB has been expanding its footprint in Mexico and many in the game were disturbed by Trump’s disparaging remarks about Mexicans. But Manfred counseled patience.

“I think we’re all familiar with things he said about Mexico,’’ Manfred said. “I think we need to wait and see what actually happens.’’

Their opposition to Trump makes it less likely they will be sharing any of his White House athletic opportunities, including time on the putting green. Over the years, presidents also have equipped the property with a swimming pool, bowling alley, tennis court, and basketball court.

At 70, Trump is considered a highly competitive golfer. The Globe reported in March that he has a 3.0 handicap index, that he made the first hole-in-one at his newest public course near New York City, and that he has won many golf trophies.

However, Rick Reilly, a sportswriter who has golfed with Trump, was quoted as saying Trump rates an “11 on a scale of 1 to 10’’ in terms of cheating.

Trump would not be the first president to cheat at golf. Nor will he be the first to have owned a sports franchise — the New Jersey Generals of the now-defunct United States Football League in the 1980s. George W. Bush was part owner of the Texas Rangers before he became president.

But Trump’s experience runs deeper. In addition to making quarterback Doug Flutie the highest paid football player at the time he owned the Generals, Trump went on to promote boxing matches, including Mike Tyson’s heavyweight championship bout against Michael Spinks in 1988, then the richest fight in history.

Trump indicated before the presidential campaign that he supported online gambling and has endorsed the fantasy sports industry.

It remains to be seen whether he will take an interest in shaping the future of telecommunications in sports. Some sports leagues could benefit from the next president helping to clear the way for more consumers to rent single channels or buy specific sports events on a la carte basis rather than having to buy a full package of channels from cable companies.