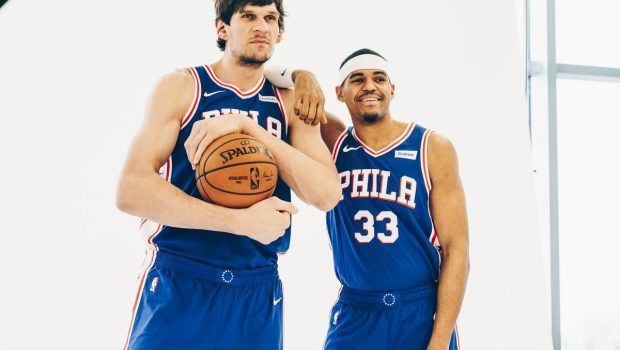 JO OR NO JO, SIXERS HARRIS AND BOBAN TAKE UP THE SLACK!

The Sixers found out just before last night’s tip against the Nets that their star center Joel Embiid wouldn’t play because of left knee soreness.

Greg Monroe started in Embiid’s place and had nine points and 13 rebounds. The Sixers won 131-115 to take a 2-1 series lead.

Tobias Harris, who scored 29 points in Embiid’s absence, said everyone knew they had to bring more to the game.

“Towards the end of the regular season we really didn’t play that well without Joel,” he said. “So, for us, it was kind of hearing that he wasn’t playing, a little added motivation I think for us as a group of, ‘Hey, we got our best player down, we all got to pay it up and step it up and stick to the game plan and be even more focused.’

“So I thought just for us to go out here and come out with that effort, I think the pieces that came in for Joel did a great job tonight. Greg had a great push out there, Boban played very well, Mike [Scott] at the 5. So we got different pieces to come along and kind of fill that void for us.”

Embiid, who missed 14 of the Sixers’ final 24 games after the All-Star break because of left knee tendinitis, was limited to 45 minutes total in the first two games of the series, which the Sixers split on their home floor.

Embiid is questionable for Game 4 on Sunday.

“It’s tough,” Embiid said before game when asked about his health. “That’s what tendinitis is all about. And some days you got your days, and some other days is different. So, even in the games that I play, I just try to go out there and try to play for these guys. I try to help us win the series and eliminate them. So, whatever, whatever I can do. But it’s hard. I just got to keep pushing it and see how it goes.”

Embiid arrived in street clothes to the visitors locker room at Barclays Center about 65 minutes before tipoff and went through a light, 15-minute workout on the court before being ruled out.

“It is becoming better slowly but surely,” Embiid said before he went out to the court for his warm-up. “We just have to be smart about how we handle it every single day. But I’m sure these guys won’t let me get on the court if there’s a chance of something bad happening. So I just got to trust the process.”

Before the game, Embiid also reiterated his apology to Nets center Jarrett Allen, whom he struck in the face with his elbow in Game 2, drawing a flagrant foul 1 after an officials review. When he initially apologized after Game 2, he and Ben Simmons, who had a career playoff-high 31 points in the Game 3 win, both stifled laughter while they conducted a joint postgame news conference.

“I was trying to be genuine, and I was actually sorry about what I did, and I actually apologized to Jarett during the game,” Embiid said, adding that he texted an apology to the Nets’ Rondae Hollis-Jefferson to pass on to Allen. “I kept asking him if he was OK. That was not my intent. I don’t do that type of stuff. And I just wanted to make sure that he was OK. So, I did apologize to him, and unfortunately at the podium, my teammate made me laugh, and it kind of took a wrong turn.

“But I was apologizing. I wasn’t laughing because of not being sorry, which I am, obviously. I’m extremely sorry. That’s not what I meant to do. I was just trying to be aggressive and make a basketball play, and sometimes you got to use your elbows to create separation, especially into the chest. But it was — I probably should have been ejected. I saw the play. That was a bad play.

“Like I said, that’s not the type of person I am. I did apologize. It’s unfortunate that I laughed. … I guess it was surprising for [Simmons] for me to be kind of humble. Which I am humble, but when it comes to basketball, I like letting people know that I cannot be stopped and that I’m the most unstoppable player in the league.”