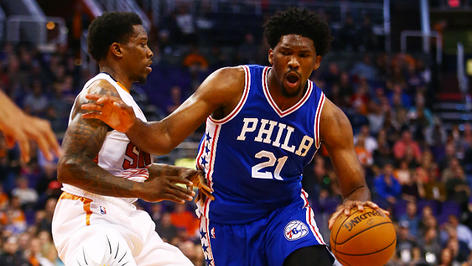 The Sixers began their four-game road trip with a 123-116 loss in Phoenix last night that easily could have been their eighth win.

Eric Bledsoe scored 16 of his 24 points in the fourth quarter and had 11 assists for the Suns, who snapped a four-game losing streak.

“They have dynamic guards (Bledsoe, Booker and Brandon Knight),” Sixers coach Brett Brown said. “…We had a hard time defending their backcourt.”

Joel Embiid (above), the highest-scoring rookie in the NBA, scored 27 points for the 76ers. Sergio Rodriguez added 21.

The Sixers led by as many as 14 in the first half and was up by 13 at the break. The Suns built a 14-point lead in the fourth quarter before it was cut to four in the waning seconds.

“At the start of the fourth quarter we just turned the ball over,” Embiid said. “We took a lot of bad shots and they just made a lot of shots, too. They’ve got good guards and got the shots they wanted.”

“He did what he should have done,” Bledsoe said. “We played like crap and he came out and did what a great coach should do: tell us what we did wrong, chew us out about it. Everybody got pumped up for the second half and it made a big difference.”

Phoenix’s 123 points were a season high.

“Defense always creates offense,” Watson said. “It’s easier to score when you have teams in transition.”

“Especially toward the end of the game, we really locked in defensively and got the stops when we needed to,” Warren said. “We just need to get consistent, get defensive stops and execute on offense.”

Trailing by 13 at the break, the Suns made four 3-pointers, two by Booker, to open the second half with a 16-2 run, briefly taking the lead at 69-68 on P.J. Tucker’s 17-footer. But Embiid sank a 3 at the other end and Philadelphia never trailed again in the quarter, leading 85-81 entering the fourth.

The 76ers had their highest-scoring half of the season, leading by as many as 14 and taking a 66-53 lead at the break.

Philly shot 52 percent in the first two quarters and was 16 of 16 from the foul line.