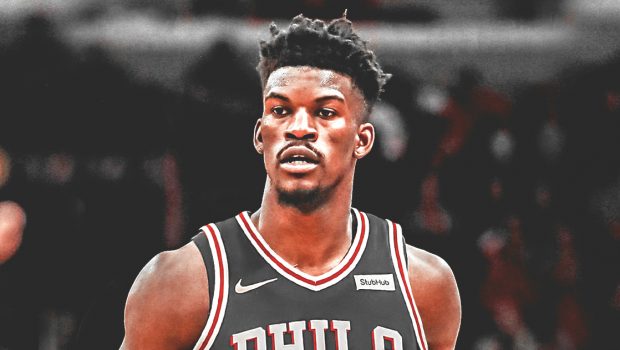 JIMMY BUTLER MAKES THE SIXERS A BEAST IN THE EAST!

The Boston Celtics’ early-season struggles have opened up a window in the Easternn Conference for the Sixers who added All-Star Jimmy Butler in a trade with the Minnesota Timberwolves yesterday.

Toronto seems to be the class of the conference and Milwaukee is right there.

Within the past two weeks, trade talks between the Sixers and Timberwolves began to advance and the Timberwolves finally gave in after losing their fifth straight game and realizing Butler had to go. The dysfunction was too much, and they found an acceptable deal with the Sixers, who gave up Dario Saric, Robert Covington, Jerryd Bayless and a future second-round pick.

Philly gave up two quality players but got a much-needed All-Star in return. Butler is the type of two-way player – All-NBA, All-Defense – who can elevate a team like the Sixers, who reached the conference semifinals last season, have an All-Star in Joel Embiid and a future All-Star in Ben Simmons.

Butler should help Embiid and Simmons, and vice versa.

Philly is 8-5 but there have been frustrating losses and a 1-5 record on the road. Sixers coach Brett Brown called a loss last week to the Brooklyn Nets “an unacceptable performance,” and Simmons and Embiid were equally angry with the loss.

Given the Sixers’ young, talented group, growing pains are expected. Don’t forget, this is a team that jumped from 28 victories in 2016-17 to 52 in 2017-18. That’s a massive and unusual leap, and modicum of regression isn’t unexpected. Still, the Sixers have high expectations, and the franchise hasn’t shied away from Finals aspirations.

And if you’re comparing the Sixers at the end of last season to the start of this year, you’ll notice two prominent absences: forward Ersan Ilyasova and guard Marco Belinelli, who left the Sixers for Milwaukee and San Antonio in free agency. They were the kind of veterans the Sixers needed and that Brown loves: gritty, tough and smart.

They get all of that and more in Butler.

Butler, who was born and grew up in Texas, brings his Lone Star straight-shooter attitude to the Sixers. He is direct, unafraid of confrontation and can be abrasive. The Sixers need his talent, his work ethic and dedication. They don’t need the dysfunction he caused in Minnesota this season. Brown is an excellent communicator who can manage intricate locker room dynamics, so that helps.

Butler forced his way out of Minnesota and landed in a great situation with Philly. The Sixers are now expected to compete for the Eastern Conference title, and Butler, who the Sixers would like to sign to a long-term deal in free agency following the season, needs to prove he was worth what Philadelphia gave up in the trade.

And it’s more than just producing on the court. He’ll do that. He needs to be a positive influence on a team with a bright future. There’s a lot riding on it, including a massive 5-year, $190 million deal the Sixers can offer Butler in free agency.