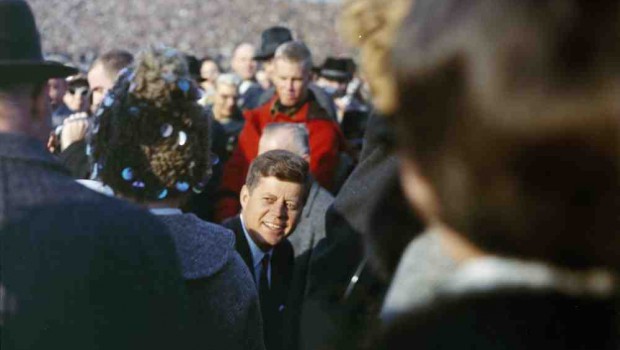 I remember a beautiful Sunday afternoon in late October 1960 as if it were yesterday.

“Come on,” my mother said to my brother Art and me, “let’s go down to Bustleton Avenue and see Kennedy.”

My mom was a Democrat though not very political, unlike my dad who followed politics closely and was a Rockefeller Republican. So I was surprised by her suggestion.

We walked the two blocks down Bergen Street and when we got close to Bustleton there were thousands of other folks who loved to see him too. We waited for about half an hour on the grass-covered island in the middle of the street, and then we heard the cheers from blocks away as John F. Kennedy’s motorcade slowly made its way toward us.

That Sunday, my mother was like a bobbie-soxer at the Paramount Theater in New York in the 1940s waiting to hear Frank Sinatra — she actually was there with my Aunt Babe — and she was waving and screaming as JFK’s car approached.

There he was in the back seat of an open convertible, tan and smiling, wearing a brown Harris tweed jacket and a grey crewneck sweater, brushing the russet-colored hair out of his eyes.

A rock star before there were such things. Or, as Norman Mailer described him in Esquire, “Superman comes to the supermarket.”

Then he was gone, headed downtown to a fundraiser at the Bellevue-Stratford nine days before his election to the presidency.

John Kennedy sure loved Philly — he enjoyed coming here for the Army-Navy game and to give speeches on July 4. He was a history buff, and we are history’s big league.

But the real reason JFK loved us was because in that closest presidential election in American history he won the national popular vote by 118,000 and he won Pennsylvania by 116,000. Loyalty is the coin of the realm in politics. And JFK was loyal to Philly and the Democrats who helped roll up that victory margin — Gov. David Lawrence, Mayor Richardson Dilworth, Sen. Joe Clark, and especially Congressman Bill Green, who chaired the Democratic City Committee. Philly got a lot of payback for the work those folks did for JFK.

Kennedy loved sports. He famously played football on the lawns of Hyannisport and less famously on the Harvard JV. He was an avid golfer and sailor, and he gravitated to pro and college stars like Vince Lombardi, whom he befriended during the 1960 primary campaign.

Sports are a useful way to connect with us common folk. But JFK’s connection seemed smoother and more natural than that of other politicians. His allegiance to the Midshipmen was also natural, considering he was a heroic PT boat captain who saved his mates during World War II when his 109 was sunk by the Japanese.

Presidential trips to Philly for the Army-Navy game were highlights of his 1961 and 1962 schedules. One photo — taken by great Time-Life photographer Neil Leifer and reprinted above — of JFK walking across the field at Municipal Stadium on December 1, 1962, shows how happy he was to be here.

As Sports Illustrated commented in its first issue after his 1963 assassination:

“It was often difficult to keep President Kennedy away from the playing fields, either as spectator or participant. Once he slipped into an Ivy League football game (he attended many) without advance fanfare, and the first indication of his presence the 15,000 spectators had was when the band played Hail to the Chief … he lionized sports figures and made them his close friends. It was no coincidence that so many presidential appointments went to athletically oriented figures: skier Robert McNamara, ex-quarterback Orville Freeman, All-America halfback Whizzer White, basketball star Stewart Udall, boxer Mortimer Caplin and many another, not excluding his own brother, Bobby Kennedy.”

JFK was so enamored of Philly that when Kennedy family friend James P. Clark, managing partner of the Eagles ownership group, died in April 1962, he was interested enough to authorize his younger brother Ted to approach the Eagles about buying the team.

As was reported in “The Eagles Encyclopedia,” by Ray Didinger and Robert S. Lyons, “… Kennedy was thinking about what he might do after completing his second term in office. He still would be a young man (51), and the thought of owning a pro football team intrigued him … however, before the meeting could take place, Kennedy was confronted with the Cuban missile crisis, and all other business was put on hold. He never pursued the matter after that.”

Soon after the missile crisis, JFK made his last trip to Philly, for that 1962 Army-Navy game at Municipal Stadium, which, after his death, would be renamed for him.

In those days, Army-Navy was not only a major athletic event but also a cultural event that attracted moneyed types from New York and Washington. The Pennsylvania Railroad laid temporary tracks close to Municipal Stadium so the swells could make the trip more conveniently.

Kennedy came to town by rail, and he loved mingling with the crowd and the Philly cops who were assigned to protect him. But more than anything he came for the game. He was scheduled to come again for the 1963 game, and he even sent a telegram on Nov. 20 to Navy coach Wayne Hardin:

“I hope to be on the winning side of the Army-Navy game when it ends.”

Two days later the naval hero was dead, and the game was postponed and played, at Jacqueline Kennedy’s request, in his memory on December 7 at Municipal Stadium. Wolman and Robert Kennedy at Franklin Field in 1964.

Later in December 1963 , the Eagles were sold to Washington developer Jerry Wolman, who was a huge JFK fan and had visited him in the Oval Office. So when the Birds played their first exhibition game in 1964, against the Detroit Lions, Wolman donated half the game’s revenue to the fund that would build and maintain the JFK Library. The game was played one week after Bobby Kennedy riveted the Democratic convention in Atlantic City with a speech that made people think and made people cry.

At halftime at Franklin Field on that late August Sunday, Bobby walked slowly around the track, shyly waving as the 30,000 fans stood and cheered.

Philly loved the Kennedys back.