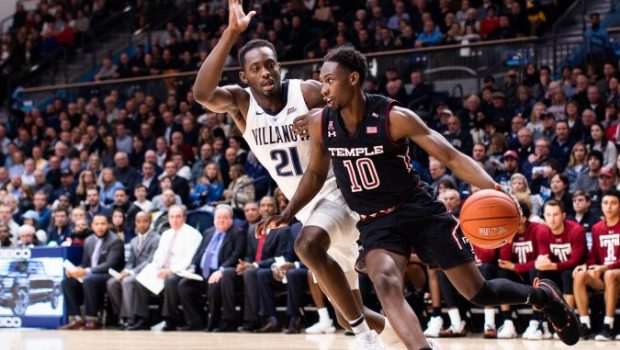 Jermaine Samuels hit three 3-pointers in the second half that helped No. 21 Villanova knock off Temple 69-59.

Samuels had hit only four 3s all season and averaged only 3.0 points. The Owls gave him nothing more than a passing glance when they made plans for an upset.

“We didn’t come in focused on him being a threat,” Owls guard Shizz Alston Jr. said.

Samuels scored a career-high 15 points, making up for an otherwise off night for the national champions.

“We very easily could have been on the other end of this,” coach Jay Wright said.

The Wildcats (7-2) also earned their 24th straight win against Big 5 teams — the annual round-robin games against city rivals Saint Joseph’s, Penn, La Salle and the Owls. Villanova hasn’t lost a city series game in six years on the dot — 76-61 on Dec. 5, 2012, against, yup, the Owls.

This year’s Owls (7-2) gave the Wildcats a heck of a game that made another upset seem quite possible.

The Wildcats had reeled off a record Big 5 winning streak without much of a challenge as they ascended from the best in the city to best in the nation. They have won two national championships since they last lost a Big 5 game. But the Wildcats lost four players in the NBA draft and don’t have any immediate lottery picks set to replace them.

Villanova pumped $65 million into a renovation of the Pavilion that has yet to develop a formidable home-court edge. The Wildcats were stunned in consecutive losses to Michigan, in a national championship rematch, and in overtime to Furman that dumped them from the Top 25. They rebounded to win a tournament in Florida but were tested on Saturday in a seven-point win against La Salle.

Temple pushed Villanova to the brink of its first three-game losing streak at the Pavilion since 1993.

The Owls were off to their best start since the 2012-13 team went 8-1 but had yet to play a Top 25 team. Alston and Quinton Rose both came in averaging 17.1 points but each struggled against the Wildcats. Nate Pierre-Louis keyed Temple’s surge and kept the lead at four with 6:20 left.

Saddiq Bey and Eric Paschall slipped in on the weak side for two put-back dunks that sparked Villanova’s rally and Samuels buried a 3 from the top of the arc as part of a 10-0 run.

“I was just playing off my teammates,” Samuels said.

Samuel had made just 10 baskets all season.

“We were more surprised that he hadn’t been making shots,” Wright said. “We figured it was coming.”

Rose had opened the second half with a 3 that put the Owls ahead 26-24 and scored a fast-break layup off a turnover for a seven-point lead that silenced the home crowd. The Wildcats missed 17 of 22 shots in one stretch until Samuels hit a 3 that pulled them within two.

Pierre-Louis led the Owls with 17 points.

Maybe it was the late tip that made the Owls and Wildcats play sleepy basketball in the first half but this was no Big 5 classic. The Wildcats shot just 34 percent from the floor and led 24-23 at the break.