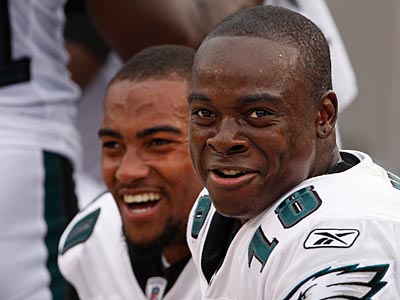 HOW JEREMY MACLIN HAS GOTTEN THE LAST LAUGH ON HIS CRITICS

Maclin has gotten out of D-Jax’s shadow.

When Eagles training camp opened four months ago, there was a big question mark hanging over Jeremy Maclin.

When the Birds cut jackson last March, the Eagles were essentially saying:

“We think Jeremy Maclin will be healthy and can more D-Jax’s shoes.”

Maclin’s health was in question because he had suffered an ACL injury in the 2013 training camp and missed the entire Eagles’ 10-6.

Lots of naysayers were saying that Maclin might come back but he would surely have lost a step, crucial to a wide receiver.

Well, we are now through the first half of the season — eight games — and how has Maclin done?

He leads the team with 45 catches, 790 yards receiving, and eight touchdowns. He’s a big reason why the Eagles (6-2) lead the NFC East, and he’s on his way to cashing in after turning down a multiyear contract for a one-year deal.

”I just did what was best for my situation, me and my family,” Maclin told the Associated Press last week.

”That was what was right with the ability to make something happen during the season. When the time comes, it will take care of itself. Most important thing is to play and keep helping my team win.”

Maclin has 18 receptions for 345 yards and four touchdowns in the past two games. He’s the first Eagles player and the 13th player in league history to have at least 150 yards and two TDs in consecutive games.

”Obviously, he’s got outstanding speed and he’s got really good hands,” coach Chip Kelly said. ”He’s done an unbelievable job this season of making great catches on the sideline for us. He’s got a real toughness to him. He’s a complete receiver because he’s not a selective participant when it comes to the run game. He’s been a real physical blocker for us on the edge.”

”He’s a really good route runner, so I think it’s not just a speed component that makes him a good receiver,” Kelly said. ”He’s got a want-to in terms of wanting to go get the ball and being that type of guy that when you call his number, he’s going to go get it.”

A first-round pick in 2009, Maclin has never had a 1,000-yard season. His most productive season was his second year when he had 70 catches, 964 yards and 10 TDs. At this rate, he’ll surpass those numbers in a couple weeks.

”It’s just about going out there and playing football,” Maclin said. ”Chip does a good job putting guys in space, helping them be successful and using their skill set. Then it’s up to us and our ability to make plays. Everything works together. Obviously, you need the right scheme, but you need the players to plug into that scheme.”

Kelly and the coaching staff were excited to have Maclin play in their up-tempo offense in 2013, but he went down on the second day of training camp. Maclin heard the pop in his right knee before he hit the ground and knew right away it was serious. He suffered the same injury at Missouri four years before the Eagles drafted him and understood the long road to recovery.

”When I went down, the one thing I told myself was to come back and give myself a chance, to be better than what I was,” Maclin said. ”This year, I have had my number called quite a bit and all I can do is be reliable for my team.”

Maclin was on the opposite end of a 52-yard pass from Mark Sanchez on the first play after Nick Foles broke his collarbone last week at Houston. He wasn’t the deep threat in the offense when Jackson played here, but he’s doing the job well.

Maclin has a chance to post big numbers again when the Eagles host the Panthers (3-5-1) on Monday night. Carolina’s secondary has struggled this year, allowing 17 TD passes.