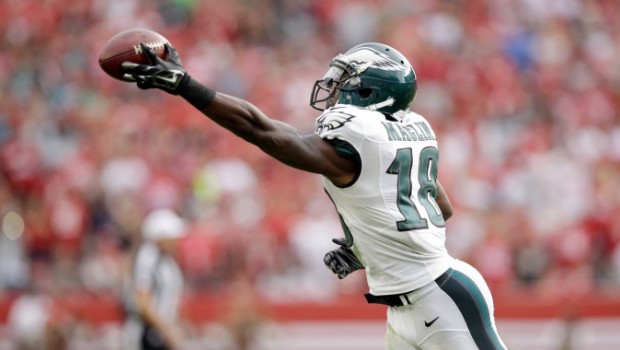 With Shady McCoy struggling, DeSean Jackson in DC and Nick Foles showing signs of erratic play, Jeremy Maclin has become the Man in the Eagles Offense, such as on this incredible one-handed catch near the end of last week’s Niners games

While the rest of the Eagles got to participate in coach Chip Kelly’s frenetic fast-paced offense last season, wide receiver Jeremy Maclin was sidelined with an ACL injury.

Now Maclin has returned and he is making defenses pay.

“It makes my job a lot easier when you have other guys around you who can make plays– and also when you have the best running back in the league back there as well,” Maclin said with a nod to LeSean McCoy. “It’s definitely a lot of fun, a lot of space to go out there and make plays.”

Entering this Sunday’s game with his hometown team, the St Louis Rams, Maclin is the Eagles’ receiving leader with 20 catches for 353 yards and three touchdowns. The former Kirkwood (Mo.) High star is the fifth-leading receiver in the NFL and averaged a team-best 17.6 yards per catch.

Maclin injured his knee in the early stages of training camp last season.

“There was no last year,” Kelly said. “Mac got hurt three or four days into training camp. Unfortunately for us, we didn’t have a chance to have him in our first year here, but he’s worked extremely hard from a rehab standpoint to put himself in position.”

Against Washington, Maclin racked up eight catches for 154 yards and caught the tie-breaking 27-yard TD pass. He’s come up big near the end of games almost every week, including a 6-yard TD reception from Foles to tie the Indianapolis game on Sept. 15 and a 68-yard TD catch that helped lead to a Sept. 7 win over Jacksonville.

Is Maclin enjoying the No. 1 receiver role?

“I’ve had the opportunity to just be reliable for my team, that’s kind of how I’ve always been,” Maclin said. “I haven’t changed my approach one single bit. It’s actually how I approach the game. I think the No. 1 job for receiver is to be there when the quarterback needs you.”

On the Eagles’ final drive Sunday in a 26-21 loss at San Francisco, Maclin made one of the top catches in the league this season.

He was nearly horizontal while reaching out with his left hand to snare a pass along the sideline. He made a one-handed leaping grab, then cradled it with both arms while falling to the ground and managing to stay in bounds.

“I just tried to make a play,” Maclin said. “How I was going to do that I really didn’t know; I knew it was a situation where we needed to make a play. At the end of the day, we didn’t get the job done in that game and I think that’s the most important thing.”

A first-round pick out of Mizzou in 2009 (19th overall), Maclin has played well when healthy.

Now that he’s healthy and learning the nuances of Kelly’s offense, Maclin has become a field-stretching force.

“He’s playing at a real high level right now at receiver for us,” Kelly said. “(He’s) a legitimate deep threat in this league. He’s got real good long speed, tracks the ball really well in the air.”

Maclin signed a one-year deal with the Eagles in February and said he hopes to negotiate a long-term deal at some point. The knee injury did him no favors, but Maclin’s performance could help him land a big contract.

“Every guy wants that long term security but I think right now (the one-year deal) was the best thing for me in that situation,” Maclin said. “This is definitely a place where I want to be long term and we’ll cross that bridge when it comes.”

A big start this season is helping Maclin put the frustration of 2013 behind him.

“It was my second day of training camp when I tore my ACL,” Maclin said. “Not only not to be able to play football, but considering my situation with being my last year of my contract just hoping to get that long term security that every player wants. I’ve been blessed to be healthy again, to come out here and compete and try to help my team win.”