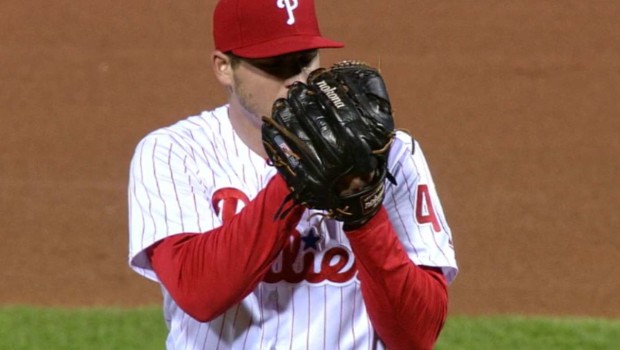 The right-hander allowed one earned run over six innings yesterday in a 7-3 win over the Twins at Target Field.

The Phillies snapped a nine-game losing streak to avoid their longest skid since they lost 11 consecutive in September 1999.

“I think every pitcher that goes out there wants to be the guy who stops the bleeding and gives us a chance to win,” Eickhoff said. “It was a great feeling to go out there and just go as deep as I could.”

The Phillies have won just three times since June 5. Eickhoff has won all three of those games, becoming the team’s most consistent starter. Phillies starters have a 5.35 ERA since they were 24-17 on May 18. They have a 5.87 ERA since the beginning of the June. But Eickhoff is 5-9 with a 3.36 ERA in 15 starts this season, including a 3-2 mark with a 2.01 ERA in five starts this month.

Remove Eickhoff from the equation and Phillies starters have a 7.36 ERA in June.

“He appears to be that guy,” Phillies manager Pete Mackanin said of Eickhoff becoming the Phillies’ stopper.

Eickhoff allowed a run in the first inning when Brian Dozier doubled down the left-field line to score Eduardo Escobar, handing the Twins a 1-0 lead. He then allowed an unearned run in the fifth, which he set up. He had been throwing to first throughout the game, but his 21st pickoff throw got away from Phillies first baseman Andres Blanco to allow Juan Centeno to reach second. Escobar singled two batters later to cut the Phillies’ lead to 3-2.

Mackanin met Eickhoff on the mound to tell him to stop throwing to first.

“I want the pitchers to be aware of the running game, but common sense dictates …” Mackanin said.

“I thought I could get them,” Eickhoff said. “It just kept on going.”