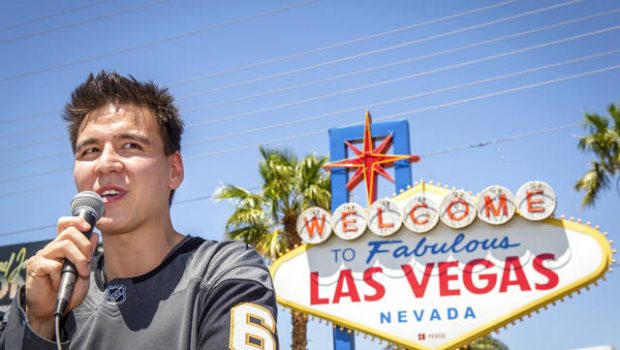 ‘JEOPARDY’ HAS MADE THIS GUY USA’S MOST FAMOUS SPORTS BETTOR!

With a higher profile than Jimmy Greek and Billy Walters put together.

That’s because Holzhauer is an all-time game show virtuoso on “Jeopardy!” with an aggressive style to win more than $1.6 million over 22 consecutive victories and swell the show’s ratings.

Holzhauer, a Las Vegas resident, makes his living betting on sports. His emergence, bracketed around the first anniversary of the Supreme Court decision allowing widespread sports gambling outside of Nevada, has given a face to the American professional sports bettor. That face happens to be clean-shaven and accompanied by tasteful button-down shirts and a math degree from the University of Illinois.

Holzhauer, who returns to competition tonight after a two-week layoff, is a new kind of representative of sports gambling, both in substance and level of fame.

Jimmy Snyder — known as Jimmy The Greek — became a celebrity picking games on “The NFL Today” in the late 1970s, but his last on-air appearance came in the late ’80s and he died in 1996.

Billy Walters made himself wealthy and gained niche celebrity as a sports bettor before earning infamy — and prison time — in an insider-trading scheme, but he never attracted broad fame.

“Gen X and under, this is one of the first cultural touchstones the American public has had to sports gambling,” Chris Grove, managing director of sports at gambling research firm Eilers & Krejcik Gaming, told the Washington Post. “It’s hard to estimate what the effect of that is, but you shouldn’t underplay it.”

When Chris Moneymaker won the World Series of Poker in 2003, he “provided a personification” of an online poker player to the public, Grove said, which helped fuel the industry.

It’s not a perfect comparison — Moneymaker was a poker player who got famous playing poker and not, say, telling Pat Sajak he’d like to solve the puzzle. But Holzhauer, like Moneymaker, is lending a persona to an industry poorly understood by those outside of it.

“This is an area that for most people is shrouded in mystery,” Grove said. “I think Holzhauer demystifies it to a degree. This is a living, breathing, relatively normal-seeming individual.”

Grove said public perception of sports bettors is defined by skepticism and negative connotation. A lot of people don’t believe it’s possible to make a living gambling on sports, and they hold a dim view of those who try. Holzhauer, Grove said, “is a counterpoint” — a whip-smart, clean-cut college graduate who proves you can earn a living picking games.

“I hope that my Jeopardy run helps destigmatize sports betting, because I have certainly dealt with some stigmas,” Holzhauer said, via email. “It doesn’t help that most sports betting personalities are touts who sell you picks that won’t actually beat the market. I hope I didn’t accidentally give those hucksters any extra customers.”

Holzhauer has used principles from his career to bludgeon his “Jeopardy!” opponents. Sports betting and “Jeopardy!” share a crucial trait at the expert level: There is more to each pursuit than guessing right, whether it’s the outcome of a game or a “Jeopardy!” clue.

Holzhauer wins at “Jeopardy!” because of his fast buzzer finger and a strategy reliant on choosing high-dollar clues first. He wins at sports gambling because he understands how to interpret movements in point spreads and knows which bookmakers to place bets with, and when. He also predicts winners and answers trivia questions correctly, but those skills are amplified by his advanced tactics.

When people express curiosity about his work, Holzhauer compares himself to an investment bank.

“There are many parallels: handicapping a team is basically fundamental analysis of a firm; in-game wagering is day trading a volatile stock; futures markets are, well, futures markets,” Holzhauer said. “The big difference is that the sports market has much higher transaction costs, so you need to be sharper to make a living in Vegas than on Wall Street.”

American Gaming Association spokeswoman Sara Slane said her organization does not track how many people identify as professional sports bettors. Through survey work, Grove said, Eilers & Krejcik pegged the number of Americans who make a full-time living betting on sports in the thousands, likely the low thousands.

But Holzhauer’s run has occurred at a hinge point in American sports gambling. In the year since the Supreme Court’s decision, states have raced to set up operations in hopes of cashing in on potential tax revenue. Along with opening myriad issues for both local governments and the sports gaming industry, the changes have raised the profile of sports betting, flooding sports networks with betting content and prompting teams and leagues to reach partnerships with casinos and sportsbooks.

“I think [Holzhauer] has helped legitimize sports gambling,” said venerable sportscaster Brent Musburger, now a host on the Vegas Sports and Information Network. “But the Supreme Court did a lot more to legitimize it, if you know what I mean.”

“I would relate it more to marijuana than I would to ‘Jeopardy!’,” Musburger added. “There’s a lot of us, me included, who do not use it. Tried it, in my case, once. Didn’t do anything for me, so I went back to alcohol.”

When Moneymaker emerged as poker boomed, the number of online players exploded. Holzhauer wouldn’t have the same effect on an industry that is far more established, but his presence may have an impact in making people more interested in sports gambling.

“I think there will be a small but measurable wave of people who see his performance on ‘Jeopardy!’ and think they would like to be a professional sports bettor, too,” said Grove. But, he added, most of those thoughts will be more aspirational than realistic.

In early April, before he would become a wealthy and polarizing sensation, Holzhauer remained only another anonymous and hopeful “Jeopardy!” contestant. A lot of people like to offer their takes on his profession, and during off-camera small talk, host Alex Trebek shared his. “I could win a thousand dollars gambling and not care,” Trebek told Holzhauer, Holzhauer recalled. “But losing 20 bucks pisses me off.” HALF OF SUPER BOWL TV VIEWERS WILL BET, 50.4 MILLION PEOPLE!