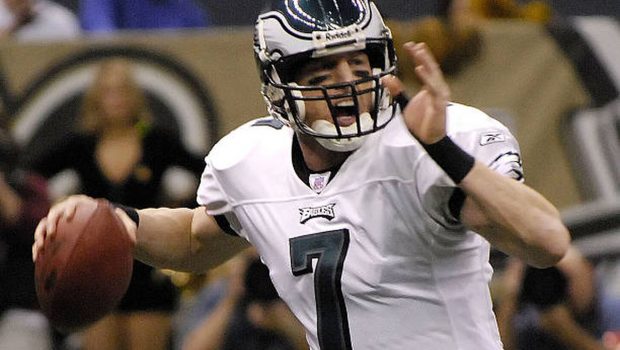 JEFF GARCIA LEADS EAGLES TO COMEBACK WIN OVER PANTHERS IN 2006!

The Eagles found themselves in a Monday Night Football matchup against Jake Delhomme and the Carolina Panthers.

It was no surprise the fans showed no brotherly love toward Garcia in his first official start at Lincoln Financial Field, as he received constant booing through most of the game. That is, until he showed them he had what it took to be Donovan McNabb’s replacement.

Trailing 21-14 at the beginning of the fourth quarter, Garcia helped the Eagles score 13 points in the final quarter as they went on to beat the Panthers 27-24. He had a history of playing well against Carolina, and this pivotal game was nothing different, as he finished 21 of 39 for 312 yards and three touchdowns.

All of a sudden, the fans who had been hating on Garcia the entire time were supporting him with nothing but brotherly love. Little did they know this was only the beginning of his era in Philly.