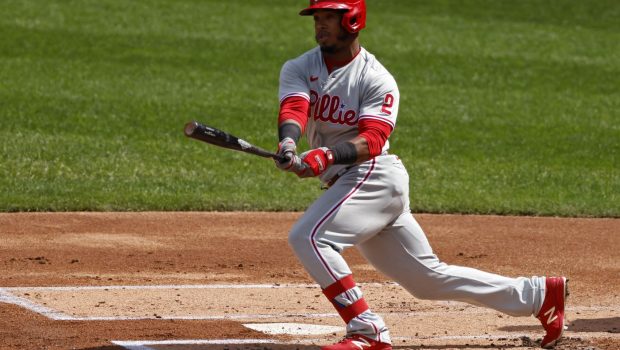 Jean Segura’s two-run homer in the 10th inning saved the Phillies’ 9-8 win over the New York Mets for a four-game split.

The Mets erased a 6-0 deficit against former teammate Zack Wheeler and baseball’s worst bullpen, taking a 7-6 lead on Jeff McNeil’s three-run homer in the seventh inning.

Phils rookie Alec Bohm countered with a tying single in the eighth against Jeurys Familia, scoring Segura before Andrew Knapp turned too wide around third and got picked off to end the inning.

Segura hit his fifth homer of the season with two outs in the 10th, lining a pitch from Miguel Castro (1-1) over the wall in left-center. Segura, who entered with 12 RBI this season. also had a three-run double in the first inning and finished with four hits.

Hector Neris allowed an RBI single to Brandon Nimmo in the bottom of the 10th but still completed his third save.

Rhys Hoskins and J.T. Realmuto homered for Philadelphia, which moved 3 1/2 games ahead of New York for second place in the NL East. The Mets dropped to 19-23.

Wheeler pitched six innings in his first start as a visitor at Citi Field and handed off a 6-3 lead that was immediately blown by a bullpen that entered with a 7.04 ERA.

Rookie left-hander JoJo Romero allowed consecutive singles to Michael Conforto and J.D. Davis, and Conforto scored to make it 6-4 when shortstop Didi Gregorius threw away a certain double play on the relay.

McNeil hit his first homer of the season a day earlier. An All-Star last year, McNeil is batting .381 (16 for 42) in his past 11 games following a cold start.

Edwin Diaz pitched a 1-2-3 ninth inning for New York, lowering his ERA to 2.04. Phillies closer Brandon Workman (1-1) walked McNeil but stranded him in the bottom half to force extras.

Wheeler allowed doubles to Andres Gimenez, Conforto, Davis and Dominic Smith during a three-run fifth, but he was otherwise excellent.

The right-hander struck out seven, allowed eight hits and hit two batters in his second start against the Mets since leaving New York to sign a $118 million, five-year deal with Philadelphia last offseason.

Hoskins added a two-run homer in the second — his ninth — and Realmuto put the Phillies up 6-0 with a solo shot off Ramirez in the fifth. Realmuto has 10 home runs.

Gregorius made another error in the eighth when he booted Davis’ grounder, but Tommy Hunter stranded two by striking out Smith. Philadelphia has made four errors and several other misplays over the past two games.

One thought on “JEAN SEGURA SAVES PHILS WIN ON A LABORING DAY!”