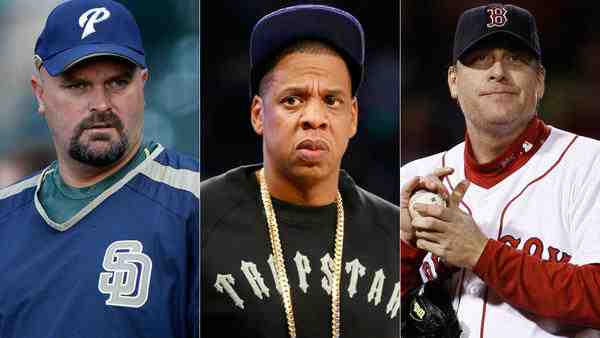 Former Phillies pitcher Curt Schilling (above right in a Boston Red Sox uni), who was a stalwart on the 1993 Wild Bunch World Series team, has been embarrassing himself lately as a conspiracy theorist and all-around blowhard.

And now the singular moment in his career has been misplaced, at least to the most powerful man in show business.

Rapper Jay Z loves sports. That includes baseball. He raps about being a regular at New York Yankees games in “Empire State of Mind” and is a certified MLB sports agent.

But, somehow or another, he managed get one of the most famous moments in recent baseball history completely mixed up.

At least according to a story tweeted out by David Cone, who won five World Series rings with the Yankees during his 17-year MLB career.

According to the Los Angeles Times, Cone attended the “SNL 40” performance in New York on Sunday celebrating the 40th anniversary of NBC’s “Saturday Night Live” and has been posting first-hand accounts of the TV show on his Twitter feed. One of those tweets Wednesday involved Jay Z and former major league pitchers Schilling and David Wells.

“Funniest story of the afterparty was when Jay Z thought @BoomerWells33 was Curt Shilling and asked him about bloody sock,” Cone tweeted.

Schilling was a hero for the Boston Red Sox during the 2004 postseason, winning Game 6 of the American League championship series against the Yankees while pitching on an injured ankle. Schilling’s blood-soaked sock from that game has become legendary.

Meanwhile, Wells was probably watching that game from home, as his San Diego Padres finished third in the National League West that year. Wells did join Schilling as part of the Red Sox pitching rotation the following year, but it’s hard to imagine a die-hard Yankees fan getting confused about one of the most devastating moments in team history.

Wells and Schilling responded to Cone’s story via Twitter.