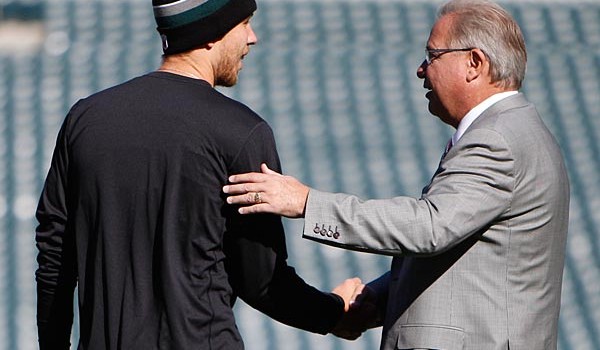 JAWORSKI TO EAGLES' FOLES: YOU'RE 18TH-BEST QB IN NFL

Earlier this week ESPN pro football analyst Ron Jaworski made news in town by saying the Eagles were the best team in the NFL, which sounded like a stretch even to diehards in Eagles Nation.

And now he has made more news by saying that Birds QB Nick Foles is only the 18th-best signal-caller in the NFL!

Here is what he wrote about Foles, whom he rated 15th last week:

Foles has been a little erratic this season. While I didn’t expect a repeat of his performance last season (27 TDs, two INTs), he’s in an amazingly aggressive passing system under Chip Kelly that is QB-friendly, so there’s an expectation that he should perform well and put up big numbers. He’s shown the ability to make some tough throws, but he’s made some poor decisions with where he’s gone with the football. You want NFL QBs to be around a 2.0 percent interception percentage (INTs compared to total attempts). Foles is at 2.9 percent this season.

I don’t know why the erratic Jaworski is on such a wild-ass roll, but maybe it is because of the 32 concussions he says he endured in his NFL career!

Here’s a link to his piece: