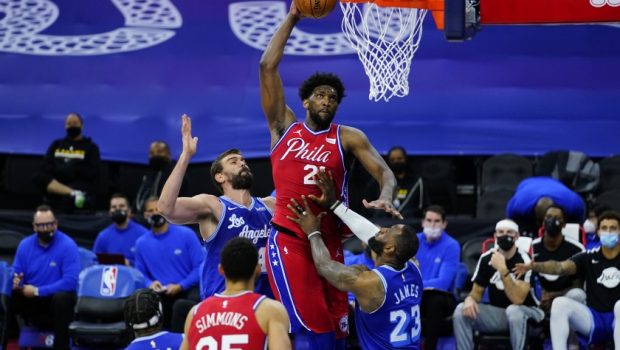 It was a scary sight.

And in the empty Wells fargo Center last night, Sixers 280-pound Joel Embiid hitting the deck was a scarier sound.

And afterward Embiid said he believed Los Angeles Lakers star LeBron James should have been assessed a flagrant foul 2 and ejected from the Sixers 107-106 home victory over the defending champions.

“First of all, I mean, you look at it, that’s a very dangerous play,” Embiid said of James’ foul, which came at the 5:44 mark of the third quarter. “I guarantee you that if it was me, I would have probably been ejected from the game, which has happened in the past with me getting flagrant fouls really for nothing.”

While he was annoyed about James being given only a flagrant 1 — allowing James to remain in the game — Embiid was equally bothered by the fact that, 68 seconds later, he was called for a flagrant 1 himself for an elbow to Anthony Davis that Embiid didn’t believe merited that penalty.

“When you compare that to the one that I got, which I thought I didn’t really hit him, I didn’t elbow him,” said Embiid, who had 28 points, 6 rebounds, 4 assists and 2 blocked shots in 38 minutes. “I might have touched him, but I don’t think it deserved the flagrant, if you’re gonna compare those two.

“Those are tough plays, and I just thought, you know, it should’ve been a flagrant 2.”

“First of all, LeBron’s not a dirty player,” Sixers coach Doc Rivers said. “It was just a physical play, and they had to call the flagrant, I guess.

“You know, all of the flagrants tonight … you can get a flagrant easy these days. But that fall was hard, and there was some concern there, for sure. The fact that Joel kept going, clearly he wasn’t the same after that, as far as his movement. And we kinda knew that, and we used him a lot in pick-and-rolls because of that.”