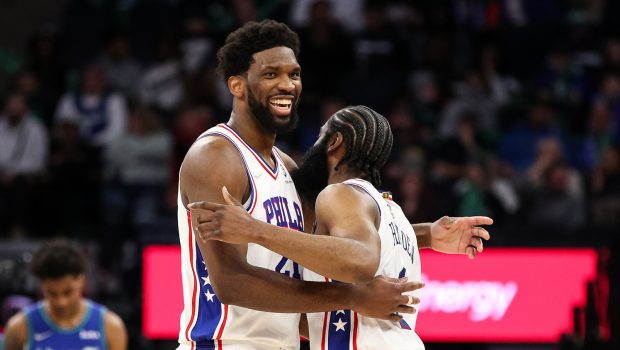 HARDEN UNPLUGGED: SIXERS IMPROVEMENT, HE AND JOJO, A ’23 TITLE!

Ever since the Sixers season ended unceremoniously with a game 6 loss to the Miami Heat in the Easter semis, James Harden has been the focus of the offseason.

His contract negotiations, which evidently allowed Daryl Morey to extract a lower figure which he used to pump up the roster.

His physical condition, which was questioned when he joined the Sixers after the Feb. 10 trade for Ben Simmons.

And the Beard has kept his quotes to a minimum.

He spoke with Yahoo Sports on Sunday, and the range of Q’s and A’s was expansive:

Why he was willing to sacrifice financially for the betterment of the team; the offseason additions; where he’s at physically; and his partnership with Joel Embiid.

Here are some excerpts:

“I had conversations with Daryl, and it was explained how we could get better and what the market value was for certain players. I told Daryl to improve the roster, sign who we needed to sign and give me whatever is left over,” Harden told Yahoo Sports.

“This is how bad I want to win. I want to compete for a championship. That’s all that matters to me at this stage. I’m willing to take less to put us in position to accomplish that.”

“I think we have a much deeper team,” Harden told Yahoo Sports. “That’s something we wanted to address. If you look at our team now, we’re positioned to go a lot further. I like how we stack up with the rest of the top teams.”

“I don’t really listen to what people are saying. I wasn’t right last season and I still almost averaged a triple-double,” Harden said.

“If anybody else had those numbers, we’d be talking about them getting the max. People were used to seeing me averaging 40, 30 points, and so they viewed it as a down year. I was in Philadelphia for a couple of months and I had to learn on the fly. That’s just what it was. I’m in a good space physically and mentally right now, and I’m just looking forward to next season.”

Harden and fellow superstar Embiid will be tasked with getting everyone on the same page.

“I talk with Joel frequently and we have meetings about how we’re going to play and what we need to do to help our team win a championship,” Harden said. “When you have two of the top players at their positions on the same team, that’s a great building block. We’re going to grow together and try to lead this team to the top. I believe we can do it together.”