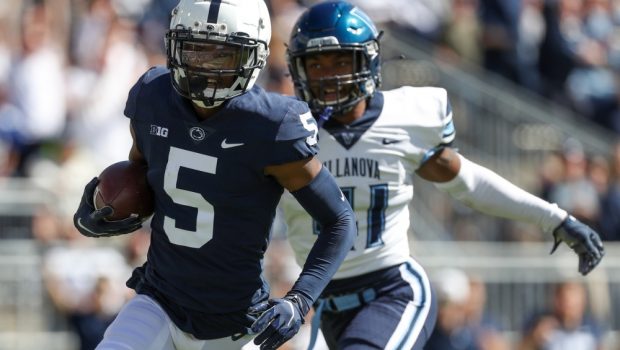 Penn State (4-0) put up plenty of points and a yards in the 38-17 win over Villanova, but coach James Franklin had some Nits to pick.

“I feel like our guys a little bit were enjoying people patting them on the back,” Franklin said. “We talked about it all week long. I don’t know if we had the same edge today that we’ve had for the previous three weeks.”

Sean Clifford passed for four touchdowns and a career-high 401 yards on 19-for-26 passing. Clifford found Parker Washington for two TDs and Jahan Dotson and KeAndre Lambert-Smith for one apiece. Tyler Warren rushed for a touchdown and Jordan Stout kicked a field goal for the Nittany Lions, who led 17-3 at the break.

It didn’t take long for Penn State to showcase its speed advantage.

Early in the second, the Wildcats pressured Clifford and brought him down at midfield for their first of three sacks on the afternoon. But the fifth-year senior popped up and fired to Washington crossing over the middle on the next play. Washington sliced through the Villanova secondary for a 52-yard score that made it 14-3.

Stout added a 29-yard field goal before halftime, but Penn State missed an opportunity for an even bigger lead.

Cornerback Johnny Dixon dropped what could have been a Pick-6 midway through the first half, and the Nittany Lions’ final two possessions were spoiled by a holding penalty and a sack.

“Good enough to win the game,” Clifford said. “I felt like we left a lot out there.”

Clifford continued to hook up with his receivers for big plays in the second half. Lambert-Smith caught a quick pass and beat the Wildcats for an 82-yard score on the second play of the third quarter. Later in the third, Washington found a hole in coverage and Clifford found him for a 23-yard touchdown pass and 31-3 lead.

Warren added a 3-yard touchdown run off a direct snap in the fourth quarter.

“We got big-played to death,” Villanova coach Mark Ferrante said. “I think it was probably six big plays, obviously the opening play of the game on their possession and then a few other long plays. But I’m really proud of the way our defense played. I’m proud of the way our offense stuck in there and put a couple on the board at the end.” 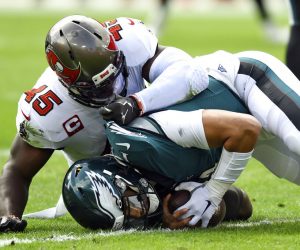 EAGLES WERE SO EASY TO DEFEND — BUCS TODD BOWLES SAID THANKS! 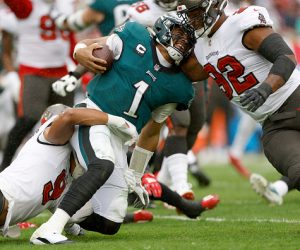 HURTS WAS SO BAD HE MIGHT’VE WRITTEN HIS TICKET OUT OF PHILLY!