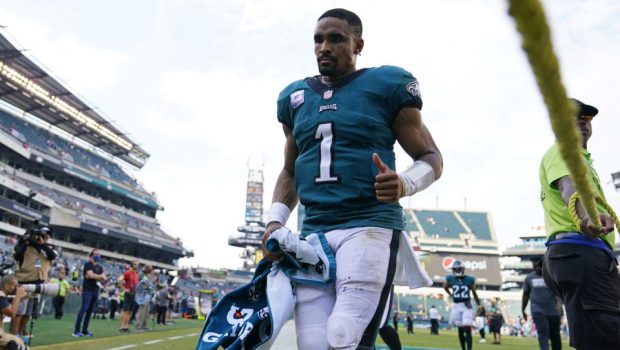 After the Eagles 42-30 loss to the Kansas City Chiefs yesterday, Eagles coach Nick Sirianni said Jalen Hurts had turned in “one of the better quarterback performances I’ve seen.”

Hurts had a different take:

“Look, we lost,” Hurts said when asked about Sirianni’s assessment.

“We lost. We lost the game. Got to do more. Got to do better. Here’s what I’m going to say: You got every opportunity to learn, right? Everything that you do, you learn from it. And we’re clearly not there as a football team because we lost. But we’re this close.”

Hurts completed 32-of-48 passes for 387 yards with two touchdowns and no interceptions. He reached career highs in completions, attempts and passing yards. Hurts also led the Eagles with 47 yards on eight rushing attempts.

“That’s one of the better quarterback performances I’ve seen,” Sirianni said, “and I’ve been around a lot of good quarterbacks with Philip Rivers and Andrew Luck. He battled. He made good decisions with the football. He got out of trouble when there was trouble. He made good checks. He made good reads.