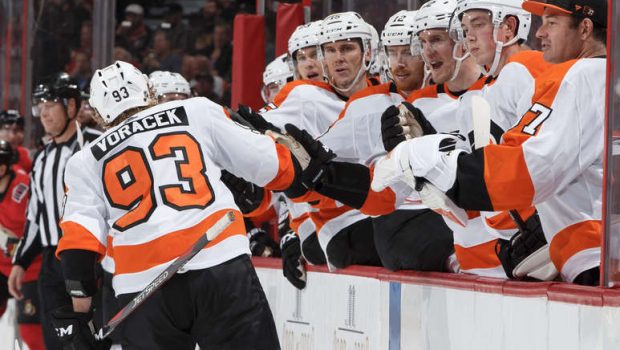 Well, the Flyers sure rebounded from that 8-2 Tuesday night loss.

“It was a tough start at home for us, but we scored seven and I think we played a pretty good hockey game,” Voracek said. “We just have to take it to the home ice now.”

Brady Tkachuk scored his first NHL goal and finished with two goals and an assist for Ottawa.

Craig Anderson made 38 saves, but the Flyers victimized him with four goals through two periods before they pulled away in the third.

The Flyers took the lead for good with 4:15 remaining in the second period when Thomas Chabot missed an opportunity to clear the puck down low and Laughton beat Anderson off a backhand.

The game took a nasty edge in the second that continued in the third.

Playing his second career game, the 19-year-old Tkachuk endeared himself to fans with his scoring touch, but also showed his propensity to mix things up when he took a double minor for roughing early in the final frame.

The Flyers didn’t score on the ensuing power play, but Hagg picked up his second of the season shortly thereafter.

Giroux scored his first goal of the season late in the period on a power play to make it 6-3.

Tkachuk, making his home debut with the Senators, got his first goal when he redirected a shot by Chris Tierney off his skate on the power play midway through the first period. He became the fastest Tkachuk to score in the NHL. It took his father Keith five games, and brother Matthew, who plays for Calgary, scored in his fourth outing.

The Flyers tied it on the power play as Voracek, at the side of the net, redirected Shayne Gostisbehere’s one-timer.

Tkachuk picked up his second of the night early in the second period as he carried the puck in and beat Pickard shortside, but less than two minutes later Couturier grabbed a rebound and backhanded it past Anderson to tie it 2-2.

The Flyers took the lead on Voracek’s second of the night as he showed great patience before beating Anderson through the five-hole. The Senators managed to tie it when Lajoie fired a rebound past Pickard.