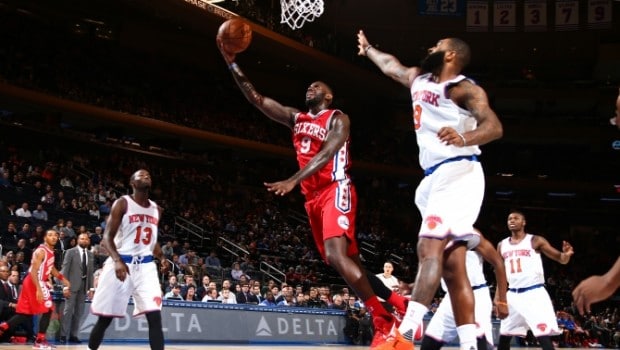 JAH-LESS SIXERS NO MATCH FOR PORZINGIS AND KNICKS 99-87

JaKarr Sampson had 12 points and five rebounds for the undermanned Sixers.

Jahlil Okafor suspended for brawling, so Kristaps Porzingis knocked out the Sixers.

The Knicks broke a four-game losing streak and dismantled the 76ers, 99-87, last night at Madison Square Garden, with Porzingis notching his ninth double-double.

The Sixers (1-19), dual keepers of the worst start in NBA history, didn’t have Okafor, the rookie who was suspended by the team after yet another video surfaced Wednesday documenting an off-the-court physical confrontation. The matchup between the No. 3 and 4 draft picks never materialized, which was a disappointment for the challenge-starved Porzingis.

“That sucks,” he said. “I definitely wanted to play against Okafor. He’s a good post player. I could definitely tell they were missing somebody and that was him.”

Nerlens Noel started in Okafor’s place and the Sixers were toothless on both ends, incapable of preventing the Knicks’ lead from ballooning to 23 to end the third quarter. The Sixers were coming off their first win a day earlier on an emotional night against Kobe Bryant and the Lakers, but were no match without Okafor and shot only 38%.

The Knicks get to face the Sixers three more times this season.

The Knicks (9-10) won at home for the first time since Nov. 17, improving to 4-6 at the Garden. They did it despite a poor shooting night from Anthony, who was still battling the effects of the strep throat that forced him to skip Sunday’s contest. Anthony missed 11 of his 16 shots and finished with 12 points and six rebounds in 26 minutes, as coach Derek Fisher pulled most of his starters for the most of the fourth quarter.

Anthony said he contemplated sitting out the game because of the illness, and Fisher theorized that his misfiring star might have been battling an imbalanced “equilibrium.”

Porzingis, amid chants from fans of “Por-zing-is,” finished with 17 points, 10 rebounds and four blocks, capping his night with a drive and jam through the lane. He continues to impress as expectations rise, but the biggest discrepancy between him and Okafor has been regarding their behavior off the court. The Latvian credited his family – specifically his eldest brother, Janis – for keeping him focused, while acknowledging the presence of hecklers.

“It’s everywhere, fans try to provoke you. You just have to be smart and avoid those situations,” Porzingis said. “For myself, it’s my family, my team obviously, they always make sure I’m focused and doing the right thing. Just focused on basketball and they’re always protecting me outside things.”