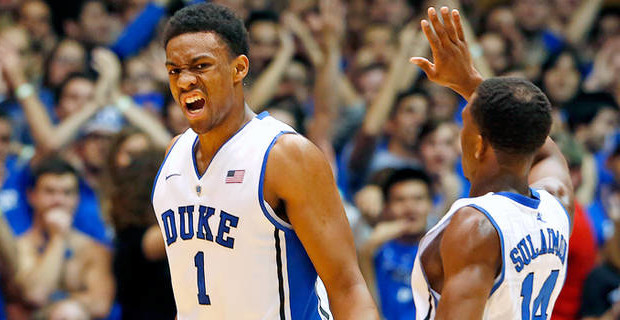 JABARI PARKER, A BLUE-CHIPPER AT 3

Offense: Ultra-skilled forward with an innate, natural ability … Remarkably advanced basketball IQ for a player his age, 19 … Already possesses many of the intangible qualities that NBA teams covet … Strong competitor that plays hard on both ends of the floor. Rarely fails to “show up” for games … Moves around the court well with or without the ball … Good overall shot-selection … Hard worker, who appears to respect the game … Has good size for a small forward (measured recently at 6’8.5″ in shoes), and still has some time to grow … Appears to have a wingspan of 7’0″ or close to it … He makes up for his lack of elite athleticism by being an aggressive athlete that takes advantage of any opportunities the defense gives to him … Has shown the ability to rise up and emphatically dunk over the top of the defense.

Defense: While Parker is a good all-around athlete, he won’t be much of a stand-out as far as the NBA is concerned … His first-step lacks the explosion of some of the other elite-level prospects he’s often compared to, and he won’t be labeled by many as a “high flyer” either … If he works hard on his strength and conditioning, he should be able to maximize his potential athletically as he grows into his height, but even for a player with a reputation like Parker, this is still an “if”.

Fit with Sixers: Although he is not the athlete that Andrew Wiggins of Kansas is, Parker moves well for his size, and is a better offensive player than Wiggins is. Parker displayed one of the best all-around offensive games in college last season, showing the ability to score with his back to the basket and also when attacking the paint from the top of the key. That is huge for the Sixers, as more than anything, they need a player to take control of their offense. Parker is not a strong defensive player, but with long defenders like Michael Carter-Williams, Thaddeus Young, and Nerlens Noel behind him, that should not be an issue in Philly.