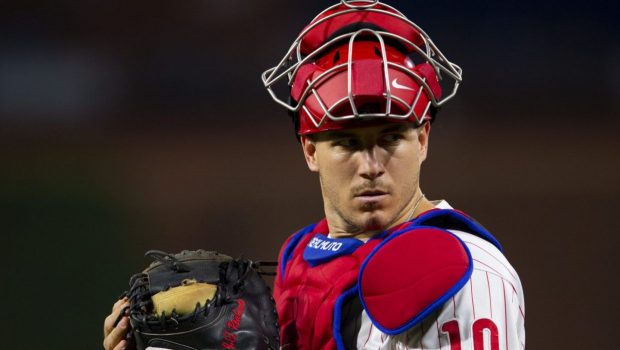 The Phillies are on a death march to the end of the season, which can’t come soon enough.

They have underachieved spectacularly, with one exception:

The question is, why hasn’t the front office already moved to lock him up long-term?

Realmuto, 28, has been the Phillies’ best player hands-down.

FanGraphs credits him with 5.7 Wins Above Replacement, which is best on the Phillies and best among catchers. It’s also 11th-best in baseball and fifth-best in the National League. At the plate, Realmuto has hit .277/.329/.498 with 25 home runs, 82 RBI, and 89 runs scored in 520 plate appearances. He’s been even better defensively, throwing out 48 percent of runners attempting to steal, the best mark in baseball.

The Phillies made four notable acquisitions last offseason, signing Bryce Harper and David Robertson while trading for Jean Segura and Realmuto. They got Realmuto from the Marlins in exchange for catcher Jorge Alfaro, top pitching prospect Sixto Sanchez, and minor league pitcher Will Stewart.

Realmuto is earning $5.9 million this season. Lauber suggests his salary could come close to doubling in arbitration going into 2020. An extension would buy out that year plus likely three or four years of free agency.