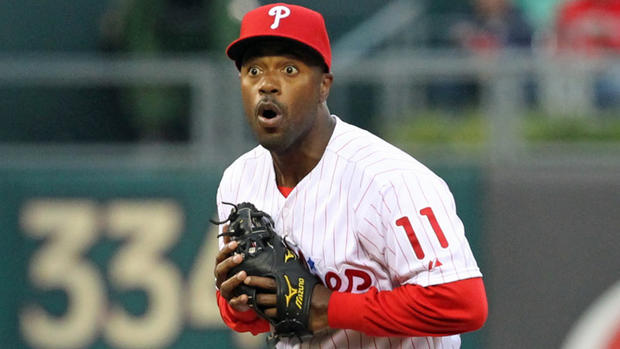 “Philly fans will tear you up, eat you alive. It’s always a tough place to play. I think the East Coast, in general, you get the Big Three — Boston, New York and Philly. Tough. Not impossible. But if you’re scared, you’re not secure, you don’t know yourself, yeah, you’ll get beat up. “

So Rollins is now a Dodger, waiving his no-trade clause so that the teams could complete a trade last Dec. 19.

In a lengthy interview Monday with FOX Sports’ Ken Rosenthal, J-Roll talked about everything under the Arizona Dodger sun:

Q: How difficult was this transition for you?

A: Unless you’re raised in this organization or you don’t have a lot of time in the big leagues, it’s hard to buy into this “Dodger Blue” thing. If you’re around long enough, you hear Tommy [Lasorda] talk about it all the time, every time you go to LA, Tommy’s on the big screen, talking about “Blue Dodger Heaven” or whatever he calls it.

As a competitor, you’re supposed to hate everything about that. It was real tough in the beginning to give in to the LA thing, the Dodger thing, the wearing of blue, being the best organization in pro sports. That’s their belief. They have to believe that. That’s their product. Now I’m part of that product. But it was tough — 14 years on the other side, learning to … I can’t say hate, that’s a strong word … but learning to want to beat the brakes off anything with LA and Dodger blue in it.

Q: How much did the two NLCS appearances against the Dodgers play into your sentiments? (The Phillies defeated the Dodgers in both 2008 and ’09, four games to one).

[In 1988], I was like, “Who are these dudes?” Obviously, we knew [Kirk] Gibson. But we had a team of stars, absolute stars. There was no way in the world we lose that World Series. Just like in 1990, when we lost to Cincinnati: “Who are these dudes?” Obviously, they ended up being great and some Hall of Famers later. But at the time, you don’t know that. We were set.

Then, in ’09, to walk off a game in dramatic fashion (Rollins hit a walk-off double in Game 4 to give the Phillies a 3-games-to-1 lead), I was like, “Yes!” The year before helped. But this was like (Rollins makes a hammering motion), the nail in the coffin.

Q: This is pretty deep-seated.

Q: What do you feel like now that you no longer are in Philly?

A: Free. I feel like I’m free to be myself without someone on my shoulder. Obviously, everyone has parameters and limits. You have to play within the boundaries. But when you’re a leader, rules are a little different for you. When you’re a superstar, rules are a little different. You’re held to a higher standard, which I love. But it brings added pressure. Which I love. But if someone buds, let ’em bud. Instead of trying to keep ’em within this framework. Just let ’em be who they are at that moment.

The general area, the city [of Philadelphia] being blue-collar, it’s not conducive for a superstar. You can be good, but you’ve got to be blue-collar along the way, keep your mouth shut, just go and work. Where obviously, this is LA. It’s almost like it’s OK to be more flamboyant. You kind of appreciate that the more you’re out there. Because LA loves a star.

So in that sense, I feel free. If I want to “show out” a little bit — from the outside looking in, people might say, “You’re in Hollywood.” But no, in some places you couldn’t do that.

Q: But in Philly, you were yourself …

A: I was definitely myself. But if I was going to talk trash, that was going to rub people the wrong way. Because it wasn’t blue-collar to talk trash. That’s more of a showboat type of thing. But I’m from California. You talk it, and you go do it. Here, you talk trash, it’s like, “Let’s see you do it.” Not, “He said this. You’ve got to get him out of here for that reason. He no longer fits in.” It’s just the way it’s perceived. Out west, out in LA, those things are perceived as being OK.

Q: Looking back, was Philly a tough place to play?

A: It’s always a tough place to play. I think the East Coast, in general, you get the Big Three — Boston, New York and Philly. Tough. Not impossible. But if you’re scared, you’re not secure, you don’t know yourself, yeah, you’ll get beat up. But if you can stand strong, believe in yourself, be confident and handle the pressure … there are different pressures on the East Coast than on the West Coast, that’s just the way it is. But if you can handle those pressures, you’ll be fine.

Everything I’ve done over there helped me along the way to deal with things. The times I got in trouble: How are you going to deal with it? The camera is on you. The media is on you. I’m not going to cause any waves. I’m going to go out there. It’s my fault. I messed up. We had rules. Go sit down on the bench and support my team the same way. You can’t cause any rifts when you mess up.

Those are the lessons I learned. You don’t make an excuse. They will tear your butt up, eat you alive. But it’s all preparation, I think — once baseball is done, for other parts of my life. You have to be accountable. If you’re going to call yourself a leader, you have to live by a different set of rules, a higher standard. That’s just the way it is.

Q: The fans expected a lot there. You hadn’t won in a long time. Then you won a lot and, boom. They wanted to win, which is all good, but it seemed like that made it tough.

A: It didn’t make it tough. That made it enjoyable. What made it tough was not getting there. Being close and not getting there. We had about a 5½-year stretch that was absolutely amazing. But with that said, you can never do enough. Not that anyone ever wants to get satisfied, not that you ever want a break — you enjoy the pressure. We put on this uniform, let’s be honest, to win. Only one team is going to win. We hope it’s us. That, I loved.

But with that comes unrealistic expectations of how you’re supposed to conduct yourself in the eyes of many. Inside the clubhouse, we were loose cannons. It reminds me a lot of this — a lot of loose cannons, a lot of joking around. But outside, it was the Phillies Way. It had to be done according to how we want to represent our franchise, which is understandable. So maybe something about yourself you kind of pulled back because it might rub someone the wrong way.

Q: I remember when you said the Phillies would beat the Mets (Before the 2007 season, Rollins said, “I think we’re the team to beat — finally. But, that’s only on paper.” The Phillies had finished 12 games behind the Mets the previous year.) There were only a few times you said stuff that was perceived as controversial.

A: See, that stuff I don’t see as controversial. I don’t perceive that as controversial at all. That was fun. But don’t get me wrong. That’s pressure. What did I say that was so crazy? Everyone wants to win. You ask anyone in our clubhouse. We think it’s our turn. I didn’t think that was controversial.

You live with the history of ’64 (the Phillies’ late-season collapse). You live with 1980 (World Series champions) for all those years. And ’93, a team that came out of nowhere and was beloved. Then we had our run. You expect more, every year, every year. As players, you want it every year. But you see the truth. When the window closed, we were still hopeful. We came from nothing. Why can’t we do it again? But you lose pieces. It makes things a lot different.

Q: But overall, you liked playing there.

A: I loved playing there. There is no doubt about that. It made me who I am. Playing there — I don’t know — but it prepared me for this. This is so loose in comparison to Philly. I know how to go about my business. I know the boundaries. I won’t cross ‘em. I know what is on the other side isn’t good. But you like that feeling. I know what I can get away with. I know what I can’t get away with. Just because I can doesn’t mean I should. But I get to make that decision.

Q: Some people felt at times that you acted too much like a superstar. That you weren’t always on time. That sometimes, you didn’t hustle. Did you feel that? Was any of that true in your mind?

A: The superstar part, not even close. On time? When I was late, I got benched. On time, if stretch is at 4:05 and you have to be there at 3, yeah, I’m late. I’m not getting there at 3. Some people get to the clubhouse at 1, but they’re playing cards, nothing to do with baseball. That wasn’t me. If stretch is at 4:20 and I’m walking in at 4 o’clock, I’m on time. Once I get there, I’m about baseball — stretch, batting practice, my cage work. I’m not sitting around hanging out. That was never me. That wasn’t my M.O.

Hustling? Hit the ball to second base, 70 percent is what I gave. When I hit it to the left side, I can’t really see, so I usually run a little run harder, because I don’t know what’s going on. But when it’s in front of me, that’s how it was.

That gets back to the higher standards. No one goes hard all the time. But with a reputation, once you get that, if you’re not going 100 percent, then you’re never hustling. That’s OK. It kept me on the field. But if I had an opportunity to score a run, I scored that run. If I had an opportunity for a hit, or to take an extra base, those are the things I did. That’s where hustle counts. When a ball is hit in the gap and you’re making sure you’re scoring the run and it kicks away from a guy and you get that extra bag, where it actually had an impact on the game.

I get it. [Manager] Charlie [Manuel] and I talked about it a lot. Sometimes I’d have an at-bat and I would ground out to the first baseman. You come out of the box with three good steps and he’s on the bag and you just kind of coast to first, the impact that can have on the team. I was like, “Everybody’s a grown man. Be your own person.” But I got his point. I definitely got it. Especially in the games I didn’t play and I would see it. I’d go, “Ah, that’s what he means.” I could definitely see it. Whether perception is reality, and that’s how people felt, I’m OK with it.

As long as at the end of the day they said I was a good person first and a good teammate, everything is good.