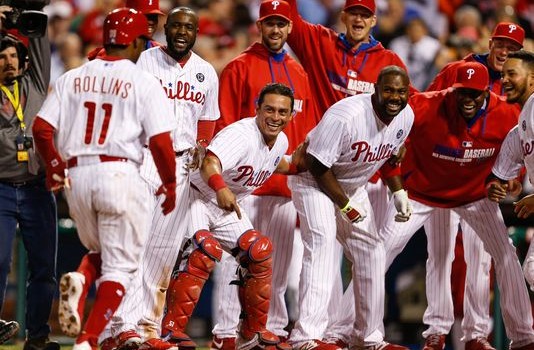 J-ROLL HITS THE MARK IN PHILS' LOSS TO CUBS

The shortstop earned that hit and a tie with Schmidt with his leadoff double in the ninth inning in a 2-1 loss to the Chicago Cubs. Rollins – who received warm ovations all night – came around to score on Domonic Brown’s two-out RBI single, but Carlos Ruiz struck out looking to end the game.

The Phillies’ second-round pick in 1996, Rollins made his Major League debut in 2000 and has been the starting shortstop ever since.

Ironically, many of the most memorable highlights of his career don’t include any of the hits in his regular-season total.

He declared the Phillies the “Team to Beat” in the National League East in Spring Training 2007 despite years of frustration and backed it up with an MVP season as the Phillies ran down the Mets for the division crown. The comments gave the Phillies a little bit of confidence and inspiration as they tried to reverse several years of coming up short.

Rollins played a key role on the 2008 World Series champions, and his most memorable play of the championship season was starting the division-clinching double play with a diving stop in the N.L. East clincher. Rollins’ biggest career hit came in the postseason as he delivered a game-winning two-out, two-run double in2009 NLCS Game 4 to help the Phillies to their second consecutive World Series.

The shortstop has played on five postseason Phillies teams. While others have matched the feat – including four other players from the current nucleus – no one has been on more.

For all the positives, Rollins has been a somewhat polarizing player as well.

Former manager Charlie Manuel benched him several times for lack of hustle, and the shortstop with full no-trade rights as a 5-and-10 player took some criticism this spring for saying he didn’t want to be traded because he wanted to reach the hit record he was on the verge of Friday – which was taken by some as prioritizing individual achievements over team.

But as he sat on the cusp of history, the fans greeted him warmly before his first few at-bats Friday.

Rollins’ numbers – which include 1,279 runs, 858 RBIs, 465 doubles, 109 triples, 207 home runs and 436 stolen bases – have generated some Hall of Fame discussion. His statistics compare somewhat favorably to some other enshrined players at the position, most notably former Reds shortstop Barry Larkin.

If the Phillies, who came into the game at 28-36, don’t make a move up in the standings in the next month, Rollins could decide to waive his no-trade rights and finish his career elsewhere.

If Rollins is traded next month, he would leave with a World Series ring, MVP award, three all-star appearances, four gold gloves – and the most hits in the long history of the franchise.

BULLISH BRYCE ON PLAYOFFS: ‘I’LL TAKE WHEELER, NOLA VS. ANYBODY’! 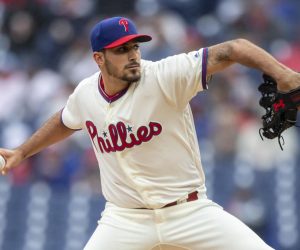 ALL OF A SUDDEN, ZACH EFLIN LOOKS LIKE A PHILLIES ACE! 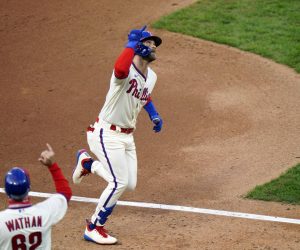 PHILS RIDE HARPER TO A SWEEP AND NO. 7 IN PLAYOFF SEEDING!