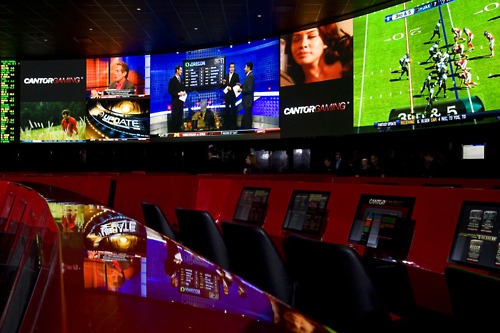 IT’S TIME TO END THE HYPOCRITICAL BAN ON SPORTS BETTING

Rory McIlroy won the British Open championship last Sunday afternoon at Royal Liverpool, going wire to wire and winning his third major championship, the Claret Jug and a check for $1.7 million — possibly the biggest payout to any golfer in history.

Rory’s dad Gerry won $342,000 on Sunday evening, and didn’t swing a golf club once. He and a few friends made a shrewd bet 10 years ago that his then 15-year-old son would win the British Open before turning 26. It’s a great story about a father’s confidence in his young son’s abilities.

But that bet would be illegal in the United States. Why?

Because sports betting is against the law in this country, except in the state of Nevada, where approximately $4 billion is wagered at casino sports books, mostly in Reno and Las Vegas (photo above.) That compares to the estimated $400 billion sports betting industry — a paltry one percent.

With football season approaching, the unanswered question arises again: Why is sports gambling still illegal? It goes on anyway, and if you want to make a bet there are plenty of bookmakers who will take your action. So why not cash in on this gigantic cash cow? Recently the U. S. Supreme Court refused to even hear New Jersey’s appeal on a lower court’s rejection of sports betting in the desperate Atlantic City economy. Legal sports betting would breathe some life into that city. Maybe not enough to save it, but certainly enough to energize it and create some action where now there is none.

Football is huge business, both the NFL and the NCAA, and the state of Delaware has parlay gambling at Delaware Park, so you can gamble there just as long as they can stack the odds against you. What a sham.

There are plenty of off-shore gambling sites here, lotteries every day of the week, and that’s that’s perfectly legal. Horse racing is run around the clock and promoted as a way of life.

Americans like to gamble on football, but if you wanted to put a half a yard on the Eagles -11 versus the Jaguars on September 7 at the Linc, you would have to go to Vegas to do it legally.

As former Eagles running back Ricky Watters famously asked, “For who, for what”?