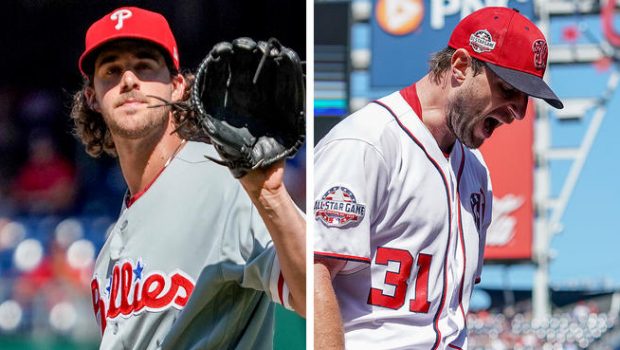 It was just a week ago that Phils ace was headed back to Philly’s summer camp after some COVID-19 caution.

Tonight he’s taking the hill against Nats ace Max Scherzer in an exo at Nats Park at 6:05.

His next start should come when the Phils host the Miami Marlins in the season opener at Citizens Bank Park next Friday.

Nola has been in position to start opening day ever since he arrived at summer camp even though he was three days late because he was exposed to someone with the new coronavirus. Nola never tested positive for the virus.

“If Spencer Howard isn’t starting in our rotation by Game 6 in New York against the New York Yankees, there’s a problem. That’s all I’ll say,” Harper said on the social media platform Twitch.

Girardi laughed good naturedly when he heard what Harper said.

“I think that we would probably stay on rotation and Aaron [Nola] would pitch Game 6,” Girardi said, “but Spencer has been impressive. And I think at some point you’re going to see this kid help us this year.”

“As long as everything comes out good,” Girardi said, “and we like what we see and he likes what we see, I think (Nola starting opening day) is a real good possibility.”

Tonight is the first of three exhibition games the Phillies will play to prepare for this virus-shortened 60-game season. They’ll host the Baltimore Orioles at 6:05 p.m. Sunday and then play at the New York Yankees on 6:05 p.m. Monday. The Phillies be making bus trips to both Washington and New York and will not be staying overnight.

Girardi said it will be good to see another team.

“You worry about guys getting tired of seeing each other,” the manager said. “Your worry is boredom setting in. Scherzer is as good as it gets, so it gives out hitters a little measuring stick.”