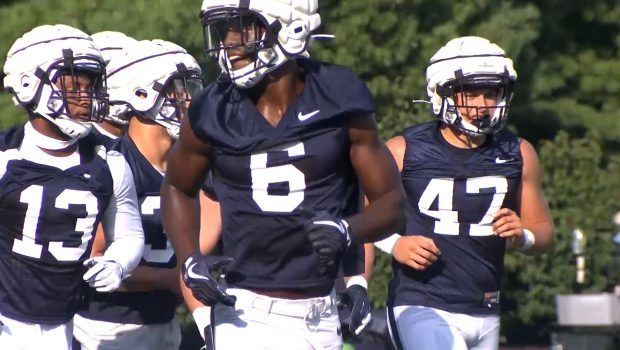 The voluntary workout period is limited to the 75 football student-athletes and members of the Nittany Lions’ strength and conditioning staff.

“We’re excited to be back, man,” Penn State offensive lineman CJ Thorpe said in the video. “Back on campus, lit. We’re ready to get back to work.”

Phase two of the players’ return will begin next Monday. Nittany Lions linebacker Micah Parsons said he’ll arrive back on campus next week, as he wanted to spend this week with his father and his son ahead of Father’s Day.

“I’m coming in Phase two,” Parsons said during a Zoom call. “I know it will be like my last week at home, and I wanted to spend Father’s Day with my son and spend it with my father for the last time before I headed back to campus.”

The NCAA on May 20 ended its moratorium on league-wide athletic activities, allowing the return for basketball and football players to their respective campuses.

“Division I football and basketball student-athletes can participate in on-campus voluntary athletics activities beginning June 1, the Division I Council decided in a virtual meeting Wednesday, as long as all local, state and federal regulations are followed,” the NCAA said in a statement.

Penn State on March 12 indefinitely suspended all athletics activities in response to the coronavirus pandemic. As a result, spring practice and the annual Blue-White spring football scrimmage were canceled.

During the hiatus, players communicated with each other and coaches via telephone and virtual mediums such as Zoom and FaceTime. Players returned to campus for phase one of voluntary workouts a week early on June 8. Groups of players were housed in State College-area hotels for the week as part of the program’s quarantine protocol.

Last week, Penn State wide receiver Jahan Dotson explained the challenges of returning to campus during the pandemic, and maintaining the safety of himself and his teammates both on and off campus.

On Sunday, Penn State announced it would return to in-person classes for the fall semester. The in-person portion of the semester, however, will conclude on Nov. 20 ahead of the Thanksgiving break.