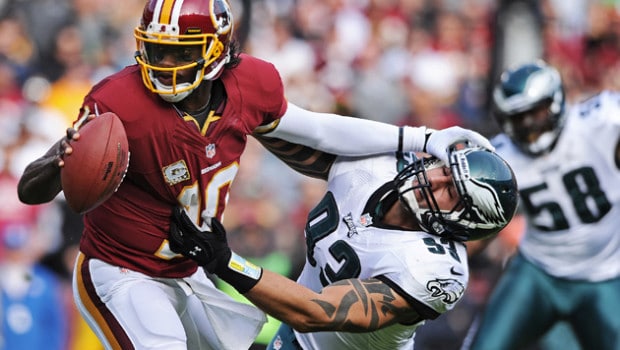 The Washington Redskins have made it official.

Quarterback Robert Griffin III has been released him two days before the start of the 2016 NFL year, the Washington Post is reporting..

The long-anticipated move clears $16.155 million off of the Redskins’ salary cap and gives Griffin a chance to revive his once-promising career. Griffin now has the freedom to sign with whichever team he wants.

Hello, Howie Boy Roseman. The Eagles would be much better off with RG3 backing up Sam Bradford than the awful Mark Sanchez!

Thus ends one of the most dramatic rises and falls in recent NFL history.

After taking the league by storm with a record-setting rookie campaign, leading Washington to the NFC East title and first round of the playoffs, Griffin never managed to recapture the magic after tearing ligaments in his right knee in that playoff loss to Seattle.

He struggled to transition from zone-read, dual-threat quarterback to a traditional pocket passer while playing under two-time Super Bowl-winning head coach Mike Shanahan and then Jay Gruden.