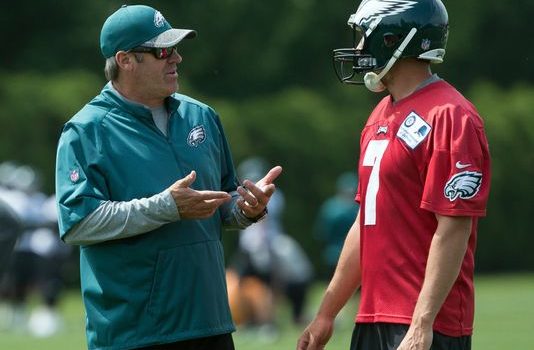 The Eagles start mandatory mini-camp today, so it’s time to assess what these 2016 Birds might become.

The Eagles have cleaned house of the “dreaded” Chip Kelly, and his ill-considered signings of DeMarco Murray, Byron Maxwell.

But the more meaningful changes have come in coaching philosophy.

While coach Doug Pederson (above with QB Sam Bradford) and offensive coordinator Frank Reich throw it back to the more conservative, traditional approach of Andy Reid, defensive coordinator Jim Schwartz is in the process of installing his base 4-3 that worked so well in Detroit and Buffalo.

The Eagles are fortunate to have players who can handle change, but the challenges outweigh any ease in transition. Here’s a breakdown of their changes by position.

Quarterbacks. The irony for Sam Bradford is that he was sitting a lot prettier as the surefire starter when he wasn’t whining about his status on the team. The Eagles still seem obligated to make the job his to lose to justify the $26 million guaranteed they gave him before making Carson Wentz the No. 2 overall pick. But while Bradford was being pouty, Wentz was being educated in a Pederson offense that’s very new to both quarterbacks. The ideal scenario is giving Wentz a full year to develop on the bench, but everyone knows that’s unlikely to play out.

Wentz has plenty of Alex Smith qualities, and may be the better option despite giving up so much experience to Bradford. They are both coming off injury-marred seasons, but there’s no question Wentz is the more durable option. There’s limited confidence in Bradford staying healthy and playing well. Pederson raving about Bradford as a leader and passer in early June is hard to buy as more than the company line, given Reich let out more uncertainty about QB earlier.

The Eagles are limiting Chase Daniel to being a well-compensated backup. Considering Daniel followed Pederson from Kansas City and already knows the system, it’s a bit of head-scratcher that he was so quickly ruled out as a potential starter. The Eagles not wanting to cut their losses with Bradford this offseason will lead to more disappointment.

Running backs. Pederson is out to correct everything Kelly did wrong with the backfield last season, minus Murray. While Murray, Ryan Mathews and Darren Sproles were slapped together with no defined roles, Pederson mastered using Charcandick West and Spencer Ware to make up for an injured Jamaal Charles last season. Although Mathews has the power running and receiving skills to jump into the lead, his durability history and age (28) say otherwise. Sproles is 32 and his burst in the passing game showed decline last season. If the Eagles don’t move him, his real value would only be in the return game.

Like with Wentz, the Eagles must have the foresight to feature a rookie sooner rather than later. Wendell Smallwood comes in with fresh legs and can handle a three-down role. Play the better kids, play better.

Receivers. This position was a lot messier with Kelly, with a bevy of wideouts playing inside and out as they tried to install the best size/speed combinations to help Bradford. The Chiefs simplified too much with former Eagle Jeremy Maclin, but that’s what Philly needed.

Jordan Matthews, at 6-3, 212 pounds, is rightfully having his role as the No. 1 expanded beyond the slot, even with some discomfort playing outside. That leaves second-year Nelson Agholor in a as a key big-play No. 2, and both Matthews and Agholor to work off the exclusive outside skills of former Giant Rueben Randle in three-wide sets. It’s on Matthews and Agholor to be a lot sharper with their hands and route-running to make this work. Whoever is at QB, he would be doomed if those two get lost in their new roles.

Tight end Zach Ertz broke out with Kelly and was rewarded with a new contract. Like the Chiefs’ Travis Kelce, Ertz is a reliable target who also has the athleticism to stretch the field like a wide receiver. Of anyone, he’s the inherited player who’s the most natural fit in Reich’s offense.

Offensive line. The skill players have much to process, so it’s good the guys up front can use their natural instincts and athleticism this season. Kelly lost the cohesiveness of what had been a good line by giving it little chance for adjustments and support before and after the snap. Pederson is keeping the key zone concepts but also will let his biggest bodies be more aggressive. Tackles Jason Peters and Lane Johnson and center Jason Kelce will all rebound, especially as run blockers, as a result.

The critical upgrade is at guard, where zone-oriented former Texans standout Brandon Brooks takes over on the right and Allen Barbre is trying to hold off newcomer Stefen Wisniewski on the left. Few teams can turn a weakness back into a strength with little personnel change, but Philadelphia can at that position.

Defensive line. Don’t be fooled about Fletcher Cox not showing up in OTAs. That’s a lot more about not getting his new contract done than him not liking the switch to the 4-3. An explosive Pro Bowler, Cox excelled at taking on more blockers at end, but he is built more to burst upfield and wreak havoc in the backfield from tackle. Run-stuffing Bennie Logan also will be fine going away from nose and Cox sliding next to him.

Schwartz had Ndamukong Suh and Nick Fairley in Detroit, and then Marcell Dareus and Kyle Williams in Buffalo. Schwartz should have the same high hopes for this combination as his front-four works inside-out again. Veteran ends Brandon Graham and Connor Barwin will benefit from the control in the middle as they focus solely on powering off the edge.

Linebackers. Nigel Bradham follows Schwartz from Buffalo after a one-year delay, and his presence and play will at least facilitate the tough switch on the strong side. Jordan Hicks starred inside as a rookie before his season was cut short by a torn pectoral muscle. He has been asked to assume a much-needed bigger role as a leader and playmaker manning the middle alone, and is fighting through a quad injury in the process. Mychal Kendricks struggled inside and there’s a bigger question of him as a liability on the weak side. The line will need to make up for the greater transitional difficulties on the second level.

Secondary. The goal here was taking a mess and making it respectable. That will be the job of returning free safety Malcolm Jenkins and new strong safety Rodney McLeod (Rams), both coming off terrific seasons. No team invested as much in its starting safeties, and the Eagles should expect steadiness and stat-stuffing to go with it. As for cleaner coverage at cornerback, that’s still sticky with young Eric Rowe and vets Nolan Carroll, Leodis McKelvin and Ron Brooks battling for jobs. Overall, it’s weaker than what has passed for Schwartz’s best groups in Detroit and Buffalo.

Bottom line. The Eagles intended to flip everything they did with Kelly, and the hiring of Pederson and Schwartz were loud indications of that. With that comes the rub of bringing in big new pieces and moving around much of the old ones. There might be a feeling they can improve from 7-9, but they could get worse before getting better. That 2015 record feels like a ceiling this season.