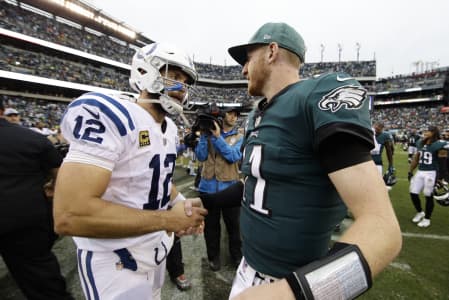 “Carson was Carson,” center Jason Kelce said. “He doesn’t change. He’s been through this before.”

And Kelce should know, since the Eagles center is as close geographically to quarterback Carson Wentz as anyone else.

“It felt good to finally be out there. It’s kind of a long time coming,” said Wentz, who was 25-of-37 for 255 yards with a touchdown, an interception, and a lost fumble. “Obviously, a lot of excitement, a lot of emotions. But coming out the way we did with that hot start going right down the field, going some no-huddle tempo, it felt good.

“Emotions were running high from the moment I woke up this morning. But for me, it’s always putting on worship music and getting into the zone like that. It just felt like another game at the end of the day.”

Wentz was sacked five times and pressured and hit a lot as Indianapolis made sure Wentz didn’t get too comfortable sitting in the pocket picking the defense apart.

Wentz threw an interception in the third quarter when his pass in the flat to tight end Zach Ertz was anticipated and intercepted by Colts linebacker Anthony Walker, who returned the football 11 yards to the 17-yard line.

“I mean, we had a lot of penalties, I had a bad snap in the red zone, and we had some turnovers. Those are things we can fix,” Kelce said. “Carson was Carson out there. It’s only going to get better as we work more together and get our timing down and fine-tune the little things.”

The win was the Eagles’ 17th in their last 20 games at Lincoln Financial Field and it was important on a day when Washington beat Green Bay and the Giants shocked the Texans in Houston. The Eagles know it’s not all there yet, but nobody seemed to care a whole lot after the game. The style points aren’t important.

“It is huge to just pick up a win, in a hard-fought game with some tough conditions out there,” Wentz said. “Guys really rallied around each other. The resilience I thought was huge today. We had that long drive at the end. We had some really unfortunate situations we were in, in second-and-extra-long, third down, the fourth down, you know, a couple of things, and guys just stayed together. The defense stepping up at the end was huge for us to get back on track.”