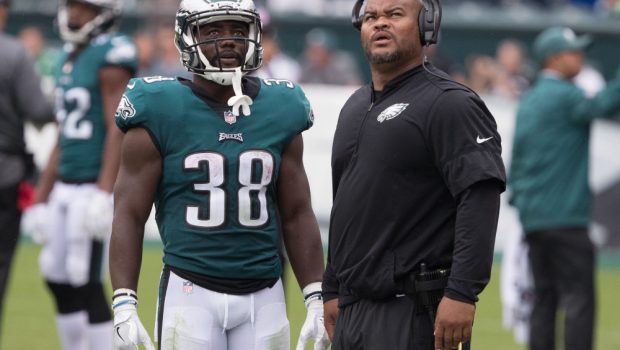 IT’S JUNE 1, AND EAGLES (EVEN JAY AJAYI) ARE THE TALK OF THE TOWNI!

Eagles Organized Team Activities kicked off yesterday in the buildup to a season set to bear heightened expectations.

The team started their offseason workout program towards the end of April and has now gone into the third phase of the three-stage offseason with their OTAs.

For one, the team has been big on resting and the plan is for the players to get lots of it this spring. That has been the case under Nick Sirianni, who believes in the importance of downtime.

Last May, the Eagles were under threat of missing out on most of their spring training so the head coach had meetings with some of the team leaders and came to an agreement. It marked his first major point as a coach and did well to get most of the team together to work out, as well as remove the mandatory minicamp in the middle of June. The Eagles are following the same model this year.

They will only be having six days of OTA’s, with the CBA limit at 10. They won’t be having full practices on those days either.

“We are transitioning away a little bit more from 11-on-11s this year. We are not going to see those this year,” Sirianni revealed. “I think you guys know we have two weeks of OTAs and look forward to getting a lot of good work done with our individual, get a lot of individuals where we can work on our fundamentals. Then we’ll be doing 7-on-7 because it helps our skill guys and quarterback in making the read and different looks he’s going to get.”

Philadelphia is one of just two NFL teams not holding a mandatory minicamp in 2022. The Cincinnati Bengals, who went to the Super Bowl last season, are also not imposing a minicamp on players.

Sirianni is keen on protecting his men and is sure this is the best way of doing so. His season in charge of the team went pretty well so there’s no reason to change course.

As to whether his methods make the Eagles competitive again, in terms of challenging for a Super Bowl, is left to be seen. They’re 28/1 with the bookmakers in that regard and, given that fans can legally bet on Penn Stakes, they might want to take advantage of what could be considered to be value odds.

Fans and reporters alike are looking forward to seeing the Eagles’ new players in action. The draft picks were on show at the team’s rookie minicamp earlier in May but the incoming free agents are yet to be seen in workouts.

While the practices won’t be like training camp and there probably won’t be enough to talk about, seeing them in some sort of activity is still something folks look forward to.

It will also be tricky to glean anything from the standpoint of defensive tactics as the Eagles aren’t participating in 11 vs 11 drills, yet there’s still something to be learned in terms of the depth chart.

The Right guard position is of particular interest as Brandon Brooks has retired and Nate Herbig is now with the New York Jets after being released. At the moment, the starter between Jason Kelce and Lane Johnson is still unknown but there are several options in Isaac Seumalo, Jack Driscoll, and Sua Opeta. Rookie Cam Jurgens is also available.

There should be something to be noted where it pertains to other positions such as how linebackers will be rotated and who the next top cornerbacks are after Darius Slay and Bradberry.

In other news, former Philly running back Jay Ajayi has finally gotten his insurance payout, four years after seeing an ACL injury end his career. Ian Rapoport of the NFL Network reported that the ex-player had received a settlement for his $5 million loss of value insurance policy.

In 2018, Rapoport reported that Ajayi bought a loss-of-value insurance policy heading into the last year of his rookie deal, which turned out to be a very smart move. The running back tore his ACL in October of that year following a season in which he helped the Eagles win their first-ever Super Bowl.

Ajayi was able to play again after rehabbing but only managed three appearances in which he registered 30 yards on 10 carries.