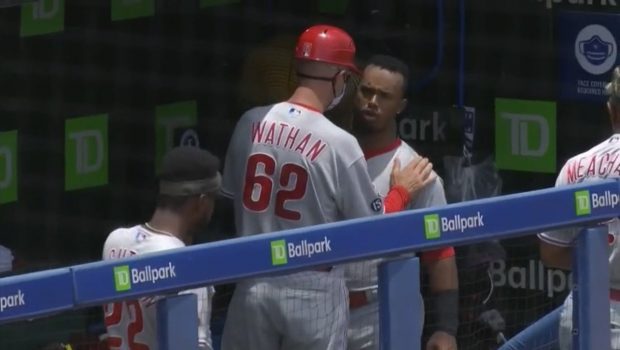 IT’S JOE GIRARDI VS. JEAN SEGURA ON THE FIGHTIN’ PHILS!

Tempers are starting to fray on the banged-up Phillies.

TV cameras showed a confrontation in the dugout between Phillies manager Joe Girardi and second baseman Jean Segura during yesterday’s 10-8 loss to the Toronto Blue Jays.

Segura committed two errors. One miscue came in the first inning when Segura misplayed a soft one-hopper by Randal Grichuk.

“That’s a bench conversation, meant for the bench,” said Girardi, who was asked about a half-dozen times about the incident. “You can ask all you want; you got everything you’re going to get about it. I’m done with it.”

At one point, Segura had to be restrained by coach Dusty Wathan.