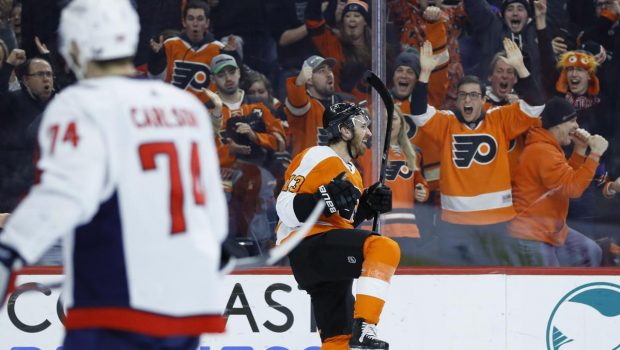 The Flyers end their homes stand tonight against the team tied for the best record in the NHL.

The Boston Bruins have 65 points, same as the Caps and the Blues, and the Flyers are stuck at 52 in the middle of the Metro pack.

They killed off all four penalties against the Capitals and have succeeded in 12 in a row, but the offense has continued to struggle for long stretches.

“We’re not finishing (on the power play),” center Sean Couturier said. “I think we’re one-and-done a lot of times. We’re getting a little more control in the zone, something to build on. But we’ve got to find a way to score some goals.”

On the defensive side, the Flyers will be short-handed once again without Shayne Gostisbehere (knee surgery) and Justin Braun (groin).

“In an 82-game schedule, you have to expect that at some point you’re going to face some adversity and we are right now,” Flyers head coach Alain Vigneault said.

Unlike the Flyers, the Bruins have had little trouble scoring goals.

Patrice Bergeron’s power-play goal 1:33 into overtime lifted the Bruins past the New York Islanders, 3-2, on Saturday. The goal extended a franchise record of 13 consecutive games with at least one power-play score.

Brad Marchand drew the penalty which gave the Bruins the extra skater. Boston had dropped six games in a row that went to overtime or a shootout.

“We didn’t have a great first, but we bounced back and it was a pretty even game after that,” Marchand told the Boston Herald. “But it’s good to get a win here in overtime. It hasn’t been good to us this year so far. So it was good to get the win. They’re a good team.”

The Bruins will be searching for their fourth straight victory when they visit Philadelphia.

Goaltender Tuukka Rask continues to play at an extremely high level. Rask made 35 saves to help preserve the overtime win against the Islanders.

“If not for Tuukka in that first 20 (minutes), you wonder where we’d be,” said Boston defenseman John Moore, who scored a goal against the Islanders. “You don’t want to stick with that recipe. We want to learn from it and improve.”

David Pastrnak has scored at least one goal in four of Boston’s last five games.