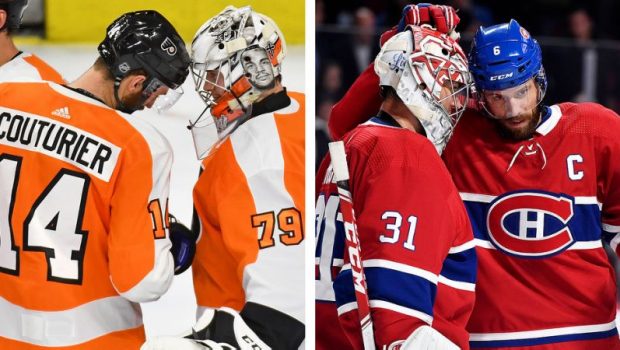 The battle between the Flyers and Habs may come down to goalies Carter Hart and Carey Price.

Both were outstanding during the qualifying rounds/round-robin series.

Price, who was the Canadiens’ best player in the play-in series posted a 3-1 record helping the Canadiens eliminated the Penguins in four games. He posted an outstanding 1.67 goals-against average and a .947 save percentage while also recording a shut out. Price looked like the goaltender who won the Hart, Vezina, William M. Jennings and Ted Lindsay trophies back in the 2014-15 season. He will need to continue to put on brilliant performances much as he did in the play-in series if the Canadiens want to have any chance of continuing their quest for the Stanley Cup.

Hart was equally impressive. While only playing in two games as opposed to the four Price played in, Hart posted a 2-0 record with a 1.00 goals-against average and a .966 save percentage. It will be Hart’s first appearance in the Stanley Cup Playoffs. However, if you’re expecting there to be some nervous feelings surrounding the goaltender you can forget, Hart is known for his calm, cool and collected approach and surely it will just be another day in the office for the young netminder. However, staring down arguably the best goaltender on the planet has to at least be intimidating.