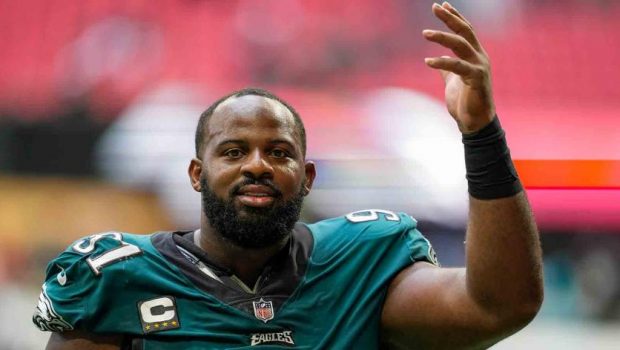 IT’S EAGLES LEGEND FLETCH COX VS. D-BOSS GANNON: WHO YOU GOT?

The Eagles defense is in disarray, and Eagles management may soon have to choose between the great defensive tackle Fletcher Cox and first-year D-boss Jonathan Gannon.

Fletch especially complained about how his aggressiveness is being taken away by Gannon’s read-and-react scheme,.

Cox even admitted to confronting the coaches on the sideline.

“It was one of those deals, as a player, I didn’t agree what was called on the defense,” Cox said. “So I kind of let my frustration go, and that’s part of the game.”

Cox has been selected to each of the last six Pro Bowls. Yet he has just one sack this season.

Those questions are also coming from head coach Nick Sirianni, who had already admitted to upbraiding Gannon after a 42-30 loss to the Kansas City Chiefs on Oct. 3.

Sirianni made more than a few references to Gannon after the game. After all, Raiders quarterback Derek Carr completed 31 of 34 passes for 323 yards and two touchdowns.

Carr’s completion percentage of 91.1% is the second highest in NFL history for quarterbacks with 30 or more pass attempts in a game, according to CBSSports’ Jeff Kerr.

“When you’re giving up this high percentage … you gotta make changes,” Sirianni said. “You gotta adapt, you gotta move. I don’t want to say you have to make a completely different philosophy switch, but we gotta do different things to help our players out.”

It got so bad that Sirianni specifically said that the attempt at an onsides kick to start the second half was because, “We didn’t feel like we were getting enough stops in the first half on defense.”

The Eagles got one stop in the first half.

That came when Carr threw an interception at the Eagles’ 4 yard line on the Raiders’ opening drive, on a pass that was deflected.

The Raiders recovered the onsides kick at the Eagles’ 41 to start the third quarter. They quickly scored a touchdown for a 24-7 lead. The Raiders’ lead was 30-7 after their next possession.

The Eagles have allowed an average of 32.4 points per game over the last five games. They have trailed by double digits in each of their last six games, winning only one of them.

Sure, that’s not all on the defense. And the Eagles certainly didn’t help themselves offensively against the Raiders, especially after Miles Sanders left the game late in the first quarter with what could be a severe ankle injury.

But the defense couldn’t even give the offense a chance.

Eagles safety Rodney McLeod was so incensed that he said he made a speech in the locker room to the team.

“Really just challenging guys and asking guys, ‘Are you committed to making this run?'” McLeod said. “If you are, come Wednesday ready to work.’ That’s it.”

McLeod was then asked if he made that challenge because he was sensing that some players weren’t committed.

“Not at all, man, not at all,” McLeod said. “I feel we all are playing and showing a lot of effort on the field … The margin of error is very small in this game, and you can’t make mistakes. We have to eliminate those mistakes and be where we need to be.”

But Cox seems to be on the verge of checking out. And it’s becoming clear that Gannon will have to appease Cox or risk the consequences.

“I’m an aggressive player and that’s how I made my living, playing in the backfield and splitting double teams,” Cox said. “I’m not used to double teams staying on me two, three yards down the field.

Cox will get his way. That means, either Gannon will change his scheme and let Cox attack, or Gannon’s replacement will.

And that could happen relatively quickly. That was abundantly clear after another desolate defensive performance from Gannon to the players.