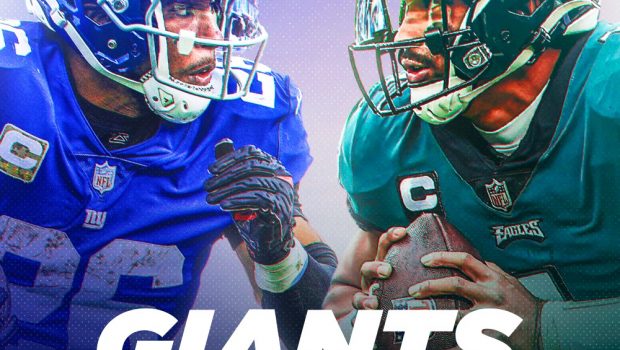 IT’S EAGLES-GIANTS IN EAST SHOWDOWN FOR CHANCE AT NFC TITLE!

Last night after the New York Giants went into Minnesota and upset the Vikings 31-24, the Birds get the G-Men for the 3rd time this season.

After resting with the 1st round bye, the Eagles will play New York at the Linc next Saturday night at 8:15pm/FoX

Key returning injured players will still be a factor:

RT Lane Johnson hasn’t played in a few weeks; he’s still nursing an abdominal tear and he vows to play through it next Saturday.

Also All-Pro QB Jalen Hurts is coming off a shoulder strain; he also says he’ll be ready to go versus the pesky Giants.

The line has opened at -7 favoring the Birds in this divisional round with the winner getting a trip to the NFC Championship game the following week.