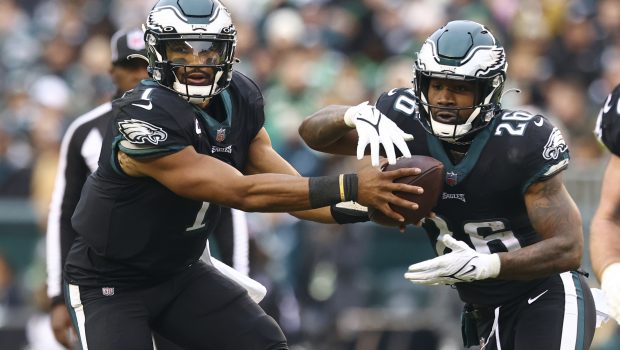 The Eagles were upset by the Giants last Sunday, and it had an effect on the chances to get a Wild Card playoff spot.

There weren’t any changes in the races for divisional titles and here’s how everything shakes out heading into Week 13:

1. Cardinals (9-2) They hope to have quarterback Kyler Murray and wide receiver DeAndre Hopkins back as they try to close out the year with a top seed and bye in the first round of the playoffs.

2. Packers (9-3) Quarterback Aaron Rodgers‘ toe may be painful, but his play remained sharp and he’ll now get some rest during the Packers’ bye week.

3. Buccaneers (8-3) A strong second half lifted them to a win over the Colts and beating Atlanta this weekend would put them on the doorstep of clinching the division.

4. Cowboys (7-4) They expect to have several players back in the lineup this Thursday as they try to snap a two-game losing streak and solidify their NFC East lead heading into the final weeks of the season.

5. Rams (7-4) Unlike the Cowboys, they don’t have reinforcements on the way to help them end their own losing streak but they shouldn’t need them to right the ship against the Jaguars.

6. 49ers (6-5) Their running game has propelled them to three straight wins and they’ll try to keep things rolling against the reeling Seahawks this weekend.

7. Washington (5-6) Five NFC East games in the final five weeks will likely decide their fate, but the Raiders are up first this weekend.

8. Vikings (5-6) The schedule offers them a golden opportunity to rebound by sending them to Detroit this weekend.

9. Falcons (5-6) They haven’t beaten a team that currently has a winning record this season and that will likely have to change this weekend for the Falcons to harbor serious playoff hopes.

10. Saints (5-6) Four straight losses have the team set to make a quarterback change in an attempt to salvage their season.

11. Eagles (5-7) A sloppy offensive performance sunk them against the Giants, but they’ll be back at Metlife this weekend with a chance to rebound against the Jets.

13. Giants (4-7) The offense didn’t take leaps and bounds without fired offensive coordinator Jason Garrett, but they got a win that keeps some hope alive in Jersey.

14. Bears (4-7) While head coach Matt Nagy didn’t get fired after squeezing past the Lions, the outlook doesn’t look much brighter after the Thanksgiving victory.

15. Seahawks (3-8) It’s now three straight losses since quarterback Russell Wilson returned to the lineup and the Seahawks are just about out of lives.

16. Lions (0-10-1) If the Seahawks keep going on their current path, Week 17 in Seattle may offer them their best chance at a win this season.