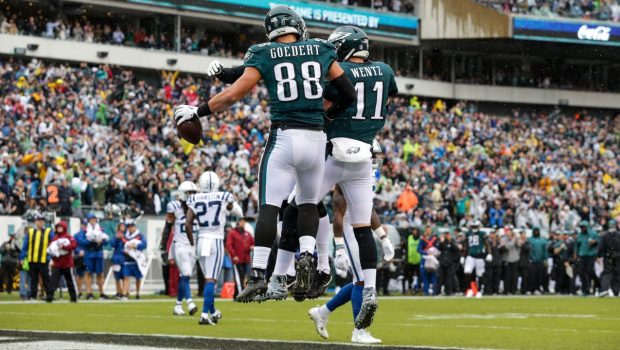 IT’S DALLAS WEEK, AND EAGLES ARE GETTING HEALTHY JUST IN TIME!

Last Thursday night at the Linc the Eagles pulled out a victory over the New York Giants they had to have.

Although after NY made it 21-10 deep into the 4th quarter it looked very bleak, especially for an offensively challenged Birds team in the early going of this crazy Covid 2020 season.

But to Carson Wentz’s credit, he dug down deep and engineered 2 TD drives, one to Greg Ward, then an amazing throw and catch to RB Boston Scott who wrestled the ball away from a Giants defender to put the Birds up by a point 22-21 the eventual final score.

Still challenged with a shell of offensive punch, the Eagles are hoping they can get back TE Dallas Goedert and WR Jalen Reagor, both on IR, but are expected to practice this week for the Dallas Cowboys.

The Boy’s have problems too, down to a third-string QB after backup Andy Dalton nearly got decapitated in an ugly loss to the Washington Football Team last Sunday. Also they are in full mutiny mode with new head coach Mike McCarthy, nice!

With the Eagles getting healthy as the Cowboys keep falling apart like a cheap suit it should be entertaining if nothing else when they visit LFF, November 1, 8:20pm/NBC