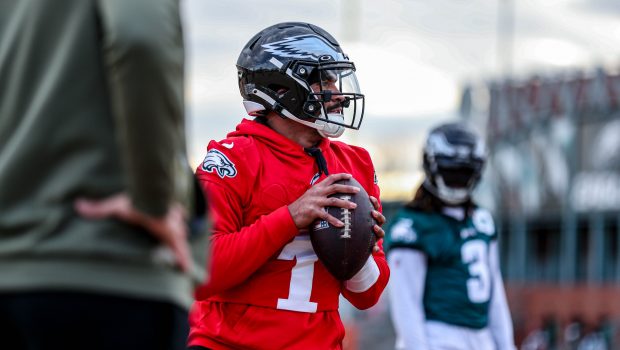 The Eagles have the week off thanks to their No. 1 seed in the NFC.

But there is activity at NovaCare and trepidation in Eagles Nation about the health of quarterback Jalen Hurts.

Hurts spoke today after he did not throw in practice earlier in the day, still bothered by a right shoulder injury.

Hurts wouldn’t deny the chance that he could still be less than 100% healthy for the Eagles’ first playoff game next Saturday or Sunday, adding:

“But I’ve played injured before.”

Hurts started in Week 18 against the Giants, completing 20 of 35 passes for 229 yards and an interception. It was his first action since suffering the shoulder injury in Week 15 against the Bears, and Eagles head coach Nick Sirianni said after the last game that Hurts was “hurting like hell.”

The Eagles will host either the Seahawks, Giants, Cowboys or Buccaneers in the divisional round of the playoffs, either on Jan. 21 or 22 at Lincoln Financial Field.

The team’s other two quarterbacks, Gardner Minshew and Ian Book, threw at today’s practice. Minshew started and finished both games down the stretch that Hurts missed, throwing for 629 yards, three TDs and three picks in the two games, plus a rushing score. Book, a 2021 fourth-rounder who was claimed off waivers from the Saints in August, appeared in one game for New Orleans a year ago, an emergency start where he was sacked eight times and picked twice.

Hurts finished the regular season with 3,701 pass yards, 22 touchdowns and six interceptions, also rushing for 760 yards and 13 more touchdowns. He’s considered one of the favorites for the 2022 Most Valuable Player award.