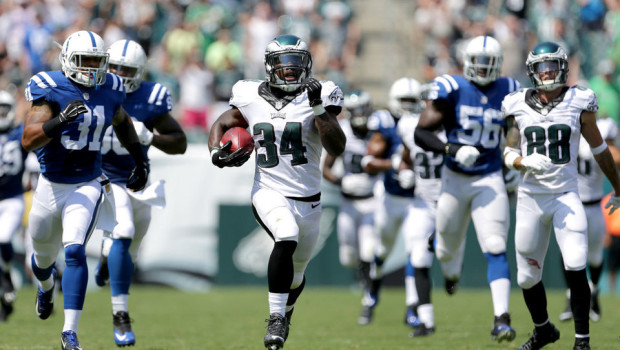 IT’S A GOOD THING THE EAGLES HAVE RB KENJON BARNER!

What would the Eagles do without Kenjon Barner?

Former Oregon running back Barner, a sixth-round pick of the Panthers in 2013 who inevitably landed in Philly via a trade with his former college head coach, is still in Philly even after Chip Kelly has gone.

Her may be the team’s starting running back!

DeMarco Murray is gone and Ryan Mathews is recovering from surgery — plus, Darren Sproles is absent from OTAs and likely gone, eventually.

Barner’s receiving talents serve him well in coach Doug Pederson’s offense. It also doesn’t hurt that Barner has high-end return skills, which helped him stick with the team in 2015.

Eventually, it could be Barner and rookie Wendell Smallwood vying for playing time and touches in 2016. At a time when the Eagles seem to be intent on shedding as many former Kelly players as possible from the roster, maybe they relish the chance to get the most out of a Kelly’s former Oregon protégé.