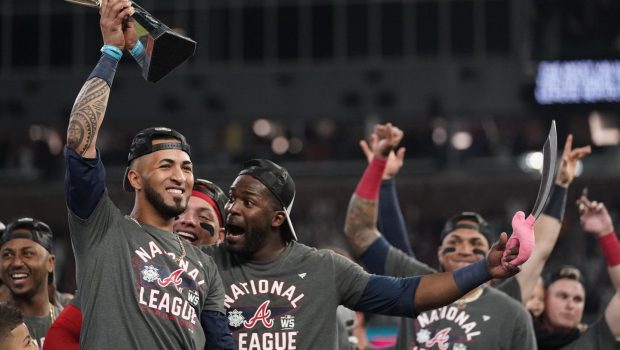 IT’S A BRAVES-ASTROS WORLD SERIES, THANKS TO EDDIE ROSARIO!

Eddie Rosario jacked a three-run homer just inside the foul pole in the fourth inning, breaking a 1-1 deadlock and propelling Atlanta to a 4-2 win over the Los Angeles Dodgers.

One season after the Braves lost to the Dodgers in a seven-game National League Championship Series, Atlanta knocked off the defending champions in six.

The Dodgers got the tying runs on base with no one out in the seventh, but lefty reliever Tyler Matzek came on and struck out three straight to electrify a thundering Truist Park gathering. The last of the three was former MVP Mookie Betts.

Rosario, who was named NLCS MVP, went 2-for-3 with a walk and finished the NLCS with a .560 average, 1.040 slugging percentage, three homers and nine RBIs in six games.