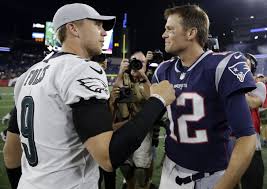 ‘IT WASN’T GOOD,’ EAGLE FOLES SAYS OF PLAY: HOW ABOUT HIS SHOULDER?

Nick Foles said after the Eagles’ 37-20 loss to the Patriots on that he’s “optimistic” that it’s not a serious shoulder injury.

But that’s not going to keep Eagles fans from wondering about his ability to take a hit as the regular season is now only 20 days away.

Foles (above, finally shaking Pats QB Tom Brady’s hand six months after the Super Bowl!) was taken into the medical tent upon getting sacked, then fumbling. Foles emerged after several minutes, and spent the rest of the game standing on the sideline.

Foles’ arm wasn’t wrapped and it wasn’t in a sling, a promising sign. If Carson Wentz isn’t ready for Week 1, Foles would be the starter.

“I was getting ready to throw a deep ball, and I got grabbed as I was following through,” Foles said. “It felt a little strange, so I was with the trainers … It feels alright. It feels pretty good. Hopefully there are no issues.

“It sort of got jarred in a funny way as I was following through.“

Still, Foles’ preseason debut couldn’t have gone much worse for him or the Eagles. He completed just 3 of 9 passes for 44 yards, and was sacked three times in just over one quarter’s worth of action.

His night ended with 12:40 left in the second quarter. On 2nd-and-8 from the Patriots’ 38, Foles was hit by New England’s Adrian Clayborn just as he was beginning to throw. The ball popped into the air, where Ja’Whaun Bentley grabbed it and ran 54 yards for a touchdown.

Foles played four series, and got about 20 snaps. Eagles coach Doug Pederson said he wanted Foles to get about 25 snaps, so he would have had another series if he didn’t get hurt.

When asked about his play, Foles responded:

“It wasn’t good. But at the end of the day, it felt good to be back out there. Just to be back on the playing field, getting a feel for the game, being in the huddle. I missed on some throws … That’s why we have the preseason to go out there and play. It wasn’t good enough. I have to be better. But at the same time, I know what it takes to keep moving forward.”

It was hardly reminiscent of his performance in the Super Bowl against the Patriots, when Foles threw for 373 yards and three TDs (he also caught a TD pass) and was named the game’s MVP.

Nate Sudfeld replaced Foles after his injury, and played well for the most part. He finished 22-for-39 for 312 yards and three touchdowns.